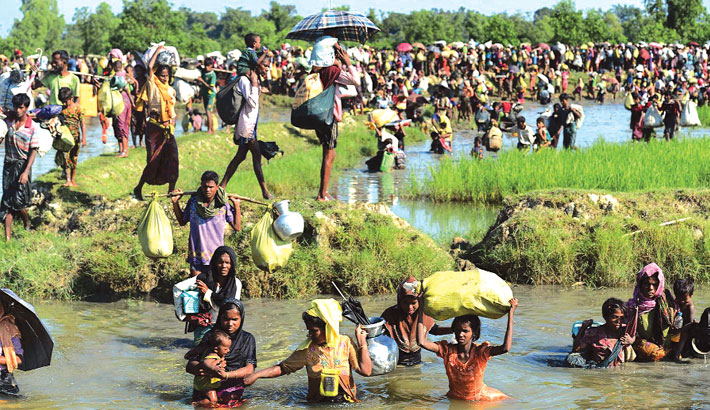 The International Court of Justice (ICJ) on Thursday said it has found “prima facie evidence” of genocide carried out against the Rohingyas in Myanmar and ordered Aung San Suu Kyi’s government to prevent “genocidal violence” against the Muslim minority group and “preserve evidence” of past attacks.

The United Nations highest court in a momentous and unanimous decision in The Hague ordered Myanmar to carry out emergency, “provisional” measures, intervening in the country’s domestic affairs by instructing Myanmar to respect the requirements of the 1948 genocide convention.

Declaring there was “prima” facie evidence of breaches of the convention, the court found the estimated 600,000 Rohingya remaining in Myanmar were “extremely vulnerable” to violence at the hands of the military.

In the unanimous ruling by a panel of 17 judges, the court said Myanmar must take all steps within its power to prevent serious harm to Rohingya, and report back within four months on the measures taken and then every six months until a final decision on the court is rendered.

The court said “Rohingyas in Myanmar remain extremely vulnerable”  and “remain in serious risk of genocide.”

The decision is the first international court ruling against Myanmar over its military’s brutal treatment on the Rohingya.

Meanwhile, some 1200,000 Rohingyas in camps in southeastern Cox’s Bazar rejoiced on hearing the ICJ’s decision and joined prayers to thank Allah for the historic decision.

“It will now be easier for us to get justice,” one of Rohingya camp leader, with tears of joy, told local journalists.

The ruling is apparently a rejection of Suu Kyi’s defence of  her military against accusations of systematic human rights abuses and war crimes during a three-day hearing at the ICJ last month.

The case was brought by the Gambia, a predominantly Muslim west African state that alleges Myanmar has breached the genocide convention, which was enacted after the Holocaust.

“The chances of Aung San Suu Kyi implementing this ruling will be zero unless significant international pressure is applied,” said Anna Roberts, executive director of the rights group Burma Campaign UK to the Guardian newspaper.

The ICJ only hears cases brought by one state against another. It has jurisdiction to hear complaints of breaches of the genocide convention even if the aggrieved state is not directly affected by violence or refugees. Any member of the United Nations can request action from the Security Council based on ICJ’s rulings.

The court can use its legal powers to impose provisional measures on member states in relation to their obligations under the convention.

Thursday’s ruling dealt only with Gambia’s request for so-called preliminary measures, the equivalent of a restraining order for states. It gave no indication of the court’s final decision, which could take years to reach.

Lawyers for the Gambia had called on the ICJ to impose protective provisional measures to prevent further killings and destruction in Myanmar. The case was heard by a panel of 17 international judges, including one each nominated by Myanmar and the Gambia.

Six of Myanmar’s most senior army officers have been accused of genocide by a UN fact-finding mission and recommended for criminal prosecution.

Suu Kyi has urged ICJ judges to dismiss allegations of genocide against Myanmar and instead allow the country’s court martial system to deal with any human rights abuses.

A Myanmar government-appointed panel, the Independent Commission of Enquiry had found no evidence of genocide. Rohingya leaders have ;labeled it as an “eye wash” ahead of the set date for the ICJ to announce its order on the genocide on the Muslim-minority group.