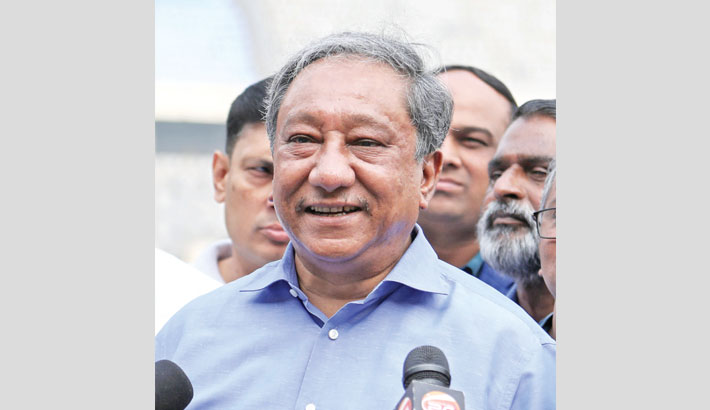 Bangladesh Cricket Board president Nazmul Hasan Papon said that it was tough for Bangladesh to say to ‘no’ to Pakistan regarding the upcoming due to the involvement of International Cricket Council (ICC).

The two-match Test series which Bangladesh would play is part of ICC World Test Championship game, organised by ICC, which is the Test equivalent of World Cup and due to that international cricket teams had already visited Pakistan and recently Sri Lanka, who were the victims of the 2009 terrorist attack in Lahore which put and halt to international cricket at Pakistan, visited Pakistan, making it tough for Bangladesh to deny to tour Pakistan.

“If it is just a bilateral series, then the situation would have been different but the two-match Test series is the part of ICC World Test Championship, which is being organised by ICC. It is a sort of World Cup for Test cricket. The championship games are being play in home and away basis, so there is no option (to avoid it),” Nazmul told the reporter on Sunday.

“I think we should take part here as a full member of ICC and ICC also wants that. This was the main pressure actually,” added Papon.

BCB President said they would get a hold of the security situation of Pakistan when they play the three-match T20 International series for which Bangladesh is leaving the country on January 22. The three T20Is are scheduled to be held on January 24, January 25 and January 27 and all the matches will be held in Lahore.

“I think we will get the whole scenario once we go there for the T20 series. If problems arise during the tour then we can discuss it and can plan the next course of action,” he pointed out.

After the T20 series, Bangladesh would visit Pakistan for two more times—firstly for first Test and secondly for an ODI and a second Test.

BCB President further said that if any unwanted situation arises in Pakistan, they would change their decision.

“ICC would send their team and they have already observed the security situation in Pakistan. Meantime, International teams have already started visiting Pakistan. Sri Lanka recently played a Test series there. ICC is sending their match officials team and so considering all those factors, it was tough to say ‘no’ to the tour. Despite all these factors, if any unwanted situation arises, then we won’t go there. If we think the situation is different than what we thought earlier, we will immediately cancel the tour.”

Papon said that they are sending an advance security team to Pakistan while they will be accompanied by personnel from national security agencies during their upcoming tour to play three-match Twenty20 series.

According to BCB officials, a group of security team will travel to Pakistan a day before the team is scheduled to move while National Security Intelligence (NSI) officials will also be with Tigers in Pakistan during the tour. “Yes, our advanced (security) team is going (before we travel to Pakistan),” Nazmul told reporters. “We will have security personnel from NSI. They will go earlier while some of them will arrive later

“We will take the best preparation possible from our side. I am trying to do that. We do not want to discuss about security issues now. There were some discussions about that. There is nothing to be worried about it. All the focus should be on the game. One can’t play his natural game if he is worried. Cricket is a tough game and if you do not have mental peace then it becomes even tougher. Moreover, T20 is a high-voltage format. The game can change at any moment. So I told them to play without being worried. I will stay with them,” he said.

Nazmul said that he is totally convinced with the security plan provided by Pakistan Cricket Board (PCB) but added that don’t want to leave any stone unturned as far as security is concerned. Bangladesh had a miserable experience in New Zealand and considering their previous experience all the measures that BCB is taking can be considered quite rational.

“We will have the top most agencies of our country NSI and DGFI (Directorate General of Forces Intelligence). As far as I know, their representatives will be waiting there for us before we reach and one of them will be with us. We will have people from both the agencies. We know that. We have planned that and we discussed about that,” said Nazmul.

“I have seen the security plan of PCB. There is nothing more they could do. But there could be uncertainty at any time,” he said.

BCB and PCB on January 14 reached a consensus to ensure Bangladesh’s upcoming tour of Pakistan would go ahead as planned though doubts were raised after the tourists decided not to have their team stay for more than seven days in Pakistan due to security reasons to play the three-match Twenty20 along with the two Test.

Under the new agreement, Tigers will play the series comprised of two Tests, three T20Is and one ODI in three phases to make sure they are staying not more than a week giving a rest to the security issues during the series that will start with the three-match Twenty20 internationals, scheduled to be held between January 24 to 27.

Tigers will return to Pakistan to play the first Test, starting on February7 while they will play the lone ODI on April 5 and the second Test of the series will begin on April 5.