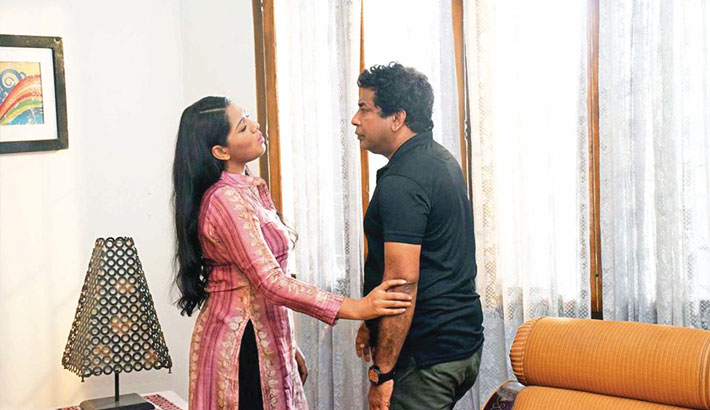 Two popular artistes of the showbiz arena Mosharraf Karim and Nusrat Imrose Tisah have paired up in a drama titled ‘Pori O Panir Bottle’. Written by Jamal Hossain and directed by Masum Shahriar, the shooting of the special drama has already been completed at a location in the capital recently.

About the drama, writer Jamal Hossain said, “The story of the drama is based on the activities of Customs Intelligence of Bangladesh. How customs intelligent officers have been tackling the drug trafficking has been depicted in the drama. Mosharraf Karim and Tisa are two prominent artistes of the country. They performed well in the drama. Director Masum Shahriar also made the drama with utmost care. I hope the audience will accept the drama positively.”

On the other hand, Mosharraf Karim and Tisha are very hopeful about the drama.

The drama ‘Pori O Panir Bottle’ will be aired on RTV at 08:15pm on January 26 (International Customs Day).

K M Mosharraf Hossain, known by his stage-name Mosharraf Karim, is a television and film actor. His most notable works include Television, Third Person Singular Number and Sikandar Box.

In 1986, Karim joined the theater troupe “Nattokendro” and worked for 15 years continuously. After over a decade in theater, Karim emerged on the small screen in 1999, with the single-episode TV play Atithi, directed by Ferdous Hasan and aired on Channel i.

While, Nusrat Imrose Tisha is a two times Bangladesh National Film Award winning actress. She is one of the most popular faces on television. Her films Doob: No Bed of Roses, Television, Third Person Singular Number gained critical acclaim worldwide.

Tisha started her acting career through the drama Shat Prohorer Kabbo directed by Ahsan Habib and written by Anonto Heera.