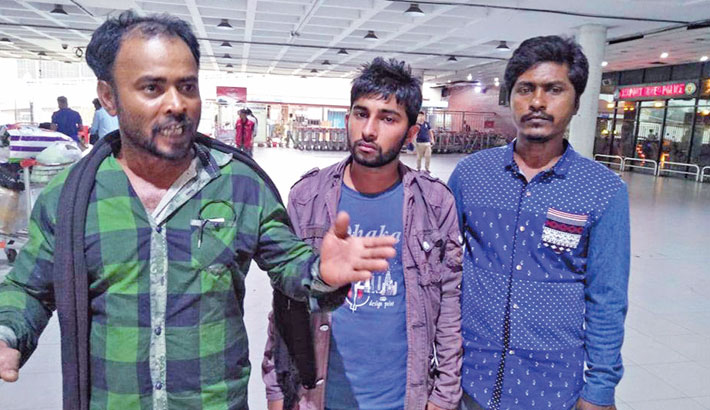 Another 224 Bangladeshi fortune seekers were deported from Saudi Arabia empty-handed on Saturday.

Just two days ago, 109 more Bangladeshi workers had also been deported from the country.

Saudi Arabia has been the major source of remittance for Bangladesh.

The South Asian country received more than $18 billion in remittance last year. Bangladeshis in Saudi Arabia sent $3.65 billion or 19.87 percent of the total amount during this period, according to the Bureau of Manpower, Employment and Training (BMET).

Last year, 3,99,000 or 56.99 percent of all overseas Bangladeshi employment were in Saudi Arabia, BMET data showed. During this time, 7,00,159 Bangladeshis found jobs abroad. But the Middle East country sent back 25,789 Bangladeshis in 2019.  Since the beginning of this year, another 834 Bangladeshi workers were deported from the country, according to official data.

Montu Mia of Narsingdi said he had gone to Saudi Arabia for a cleaner’s job about five months ago spending Tk 4 lakh. “Police arrested me when I was returning home. They deported me even after I showed them Aqama,” he said.

Shamim, 30, from Barishal, and many others had similar stories. “I went to Saudi Arabia on a driving visa three months ago spending Tk 3 lakh. I worked for about two months without pay,” Shamim said.

He said his employee arranged another job for him. “Police arrested me from there and my employer did not provide me any assistance,” he said.

Brac Migration Programme chief Shariful Hasan said many of the deportees were lured to the Middle East country with promises of good jobs and better lives. “But they faced a slew of problems and many were not paid. They are staring at an uncertain future,” he said.

“Almost all of them returned home empty handed,” Shariful said.