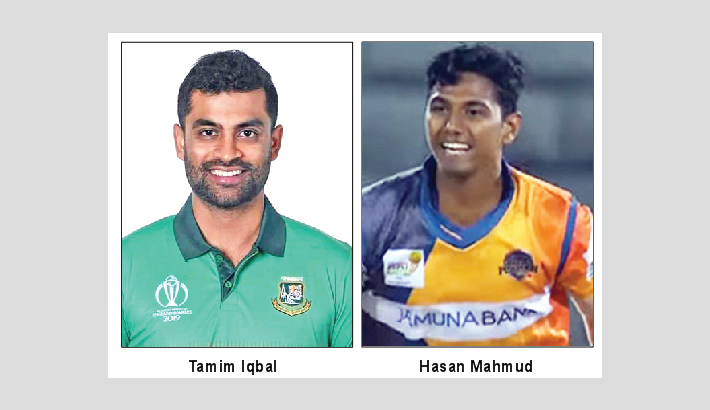 Tamim, who last played a T20I in December 2018, has recovered from a groin injury and was given medical clearance to feature in the Pakistan series.

“There was a injury concern about Tamim but he was cleared and we are delighted to have him back as we need some senior guys in the team to lead from the front considering some of our senior members are missing,” said BCB Chief Selector Minhajul Abedin Nannu regarding Tamim, who hasn’t played any international cricket match since ICC World Cup 2019.

Tamim’s poor run of form in that tournament forced him to take a break from the game. He was supposed to return with the Series against India in October but pulled out because of personal reasons while his groin injury looked to have become another headache for the national team management.

According to Minhajul, though they have included Mahedi Hasan but he is not included as someone who will bat for them at number three considering he had scored some runs at number three in the just concluded Bangabandhu Bangladesh Premier League (BBPL).

“’We picked him as an off-spinning all-rounder as he has the ability to bowl with the new ball but certainly we are not considering him as a batting all-rounder despite the fact he scored some runs in the BBPL,” said Minhajul. Minhajul also said that they included Hasan Mahmud largely due to the pace he generates.

Mahmud has played 13 T20 games and has 10 wickets at an average of 37.9 and an economy of over nine. However, he has been fairly successful in first-class cricket (24 wickets from nine games) and List A cricket (19 wickets from 15 matches).

“Hasan is the quickest bowler for us at the moment and we included him considering the pace he generates. We feel if he is nurtured in the national dressing room, it will not take him long to make himself capable of dealing with the pressures of international cricket,” he said. Nannu added that they did not include Mehedi Hasan Rana as he did not do well for Bangladesh A team despite the fact that he performed in BBPL.

“It’s true that he (Mehedi Hasan Rana) performed well in BBPL but at the same he did not perform well for Bangladesh A team in the recent past. So we want to groom him further with our second string team before bringing him in the national team,” said Minhajul

“As for Rubel, he is always in and out of the national team for the last one year but looked to be bowling consistently in one area in BBPL and we preferred him over others as he got the experience that might be essential to do well against Pakistan at their own den,” he told. Rubel has had a long break from T20I cricket with his last international game in the format was at August 2018 against West Indies in Florida.

Minhajul said that they had chosen Nazmul Hossain as there are some injury-concerns and they wanted to have him as a back-up.

“There are some injuries so we have picked him as a back-up played and make sure he is totally prepared before ICC World T20,” he said. Taijul Islam, who has picked up just two wickets from nine games in BBPL, has been dropped. Arafat Sunny, who was part of the touring side in India and last played a T20I in 2016, also has been axed from the side along with Abu Hider. Mushfiqur Rahim had earlier pulled out of the tour citing security reasons.