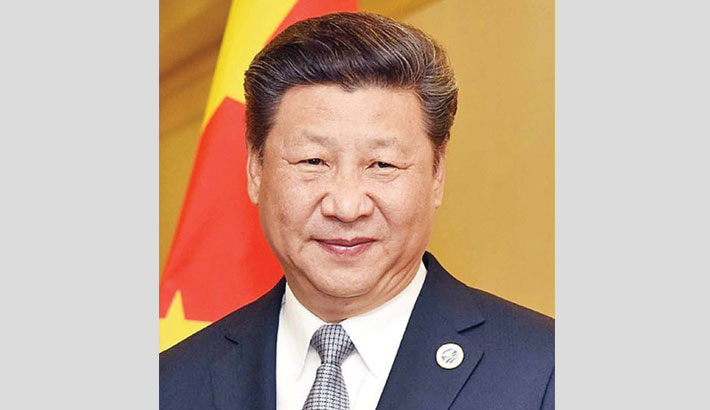 NAYPYIDAW: Chinese President Xi Jinping vowed to usher in a “new era” of ties with Myanmar after a red carpet welcome Friday on a state visit aimed at buttressing the embattled government of Aung San Suu Kyi and driving through multi-billion-dollar infrastructure deals, reports AFP.

Myanmar fighter jets escorted Xi’s plane as it touched down in Naypyidaw where children presented him with flowers, according to China’s official Xinhua news agency, as he was whisked off to a greeting party.

In addition to being its largest investor, China has become an indispensable ally for Myanmar as it reels from Western isolation over the Rohingya crisis.

But widespread mistrust of Beijing’s ambitions and its influence over armed insurgencies in areas bordering the two countries threaten to undermine the bond. Xi told Myanmar leaders he was “convinced that the concerted efforts of our two sides will make this visit a success and take the bilateral ties to a new level and into a new era,” Xinhua reported.

During the trip he is expected to sign a series of mammoth infrastructure deals as part of China’s Belt and Road Initiative—a global trade plan that promises to change the face of Myanmar.

The centrepiece of the so-called China-Myanmar Economic Corridor (CMEC) is a $1.3 billion deep-sea port at Kyaukphyu in central Rakhine state, giving Beijing a gateway to the Indian Ocean.

A high-speed rail link is also on the cards to connect the port and nearby planned industrial zone with the countries’ shared border. Bilateral trade was worth $16.8 billion last year and Beijing holds the biggest share—around $4 billion or 40 percent—of Myanmar’s foreign debt.

Billions of cubic metres of gas and millions of barrels of oil from offshore rigs are pumped each year across the country into China.

“The next one, two, three decades will be defined by Myanmar’s relationship with China,” said Yangon-based analyst Richard Horsey.

Xi will sit down with Suu Kyi and army chief Min Aung Hlaing in separate meetings Saturday. Ahead of the visit Suu Kyi made a rare appearance in Kachin state on the border with China.

Kachin is the site of a planned Chinese-backed $3.6 billion, 6,000 megawatt dam that was mothballed in 2011 in the face of vociferous criticism across the country.

This is thought to have been a personal slight to Xi, who signed off on the Myitsone dam with Myanmar’s then-military junta as vice president in 2009.