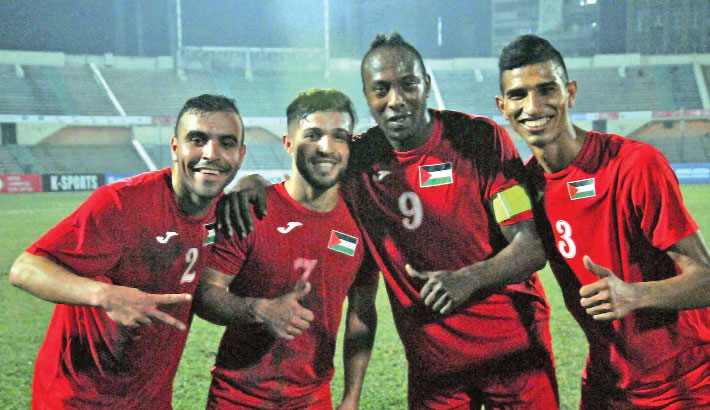 Players of Palestine National Football Team celebrate after scoring a goal against Sri Lanka during their Bangabandhu Gold Cup match at Bangabandhu National Stadium in the capital on Friday. Palestine won 2-0. — BFF Photo

Both Sri Lanka and hosts Bangladesh conceded 0-2 goals defeat against Palestine. To confirm their spot in the semifinals, Bangladesh now have to beat Sri Lanka in their second and final group match on Sunday.

In the day’s match, Palestine put pressure on the islanders with their attacking football. But Sri Lankan defenders and goalkeeper Herath Arunasiri ruined all of their attempts and saved the post brilliantly.

Palestine finally got relief when their captain Mahmoud Abuwarda sent the ball home with an eye-catching header from a cross of midfielder Sameh Maraaba in the stoppage time.

Sri Lanka, who had been maintaining a compact defensive approach from the beginning, came alive after conceding the goal and took a chance to level the margin.

But Palestine forward Khaled Salem doubled the margin with a grounder, off a through pass by midfielder Dawoud Iraqi from a cleaver counter-attack just few seconds before the final whistle.