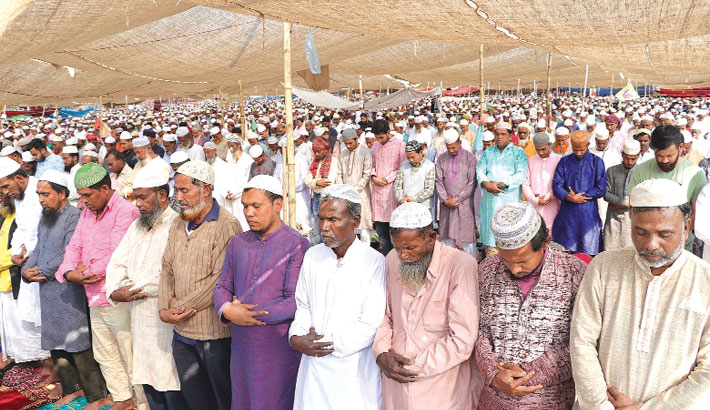 Thousands of Muslim devotees offer Jumu’ah prayers on the first day of the second phase of Biswa Ijtema at Tongi on the outskirts of the capital on Friday. - MD Nasir Uddin

The second phase of the three-day Biswa Ijtema, the largest congregation of Muslims after the holy Hajj, began on the bank of the Turag River in Tongi on the outskirts of the capital on Friday.

The 55th edition of the Biswa Ijtema began after Fazr prayers with the participation of the followers of Indian Islamic preacher Maulana Muhammad Saad Al Kandhalvi. The religious sermons were delivered by Indian scholar Maulana Mohammad Osman.

Thousands of Muslim devotees joined the 2nd phase Ijtema and offered Jumu’ah prayers on the first day. Since earlier, thousands of devotees from home and abroad started thronging the banks of the Turag River to take part in the religious event to seek divine blessings of the Almighty Allah.

Additional police have been deployed in and around the Ijtema venue to ensure security of the devotees. The venue has been brought under CCTV surveillance.

The 1st phase of the three-day Biswa Ijtema concluded on Sunday (January 12) with Akheri Munajat. The followers of Maulana Zubair participated in the first phase of the Islamic religious congregation. Earlier, the preparation works of Ijtema Maidan formally began on November 4. State Minister for Youth and Sports M Zahid Ahsan Russel inaugurated the work.

The government has already extended all cooperation for holding the religious event peacefully, said the state minister, adding that the Awami League government has set up a total of 13 deep tube wells surroundings of the Ijtema ground in the last 11 years.

Noted Indian Islamic scholar Mawlana Illyus Akhter Kandhalvi launched the Biswa Ijtema in 1920. It has been taking place on the Turag riverbank since 1967.

Tabligh Jamaat has been organising the congregation at the venue since 1967.

In 2011, Tabligh split the Ijtema into two phases, dividing the participation of the people of 64 districts, to reduce pressure on the venue and ensure better management.