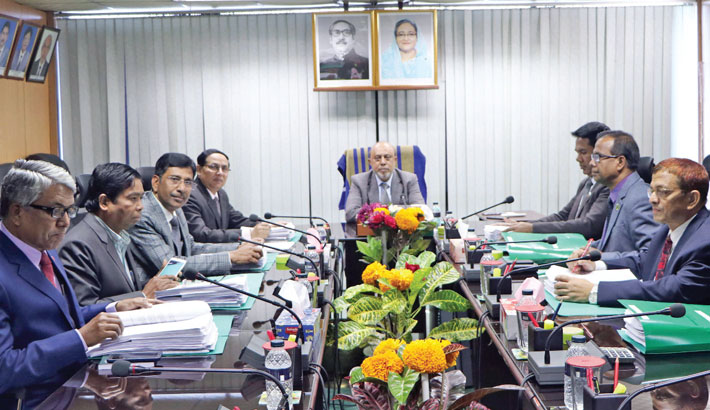 Rajshahi Krishi Unnayan Bank (RAKUB) Chairman Muhammad Nazrul Islam presides over the 509th board meeting of the bank at the head office in Rajshahi on Thursday.

SME Financing Company Limited, a subsidiary company of Rajshahi Krishi Unnayan Bank (RAKUB), has disbursed Small and Medium Enterprise (SME) loan worth Taka 29.12 crore aims at promoting the sector in different potential areas of this region during the first six months of the current 2019-2020 fiscal till December last.

It was revealed in the 27th meeting of the governing council of the company held at Board room of RAKUB Headquarters here yesterday.

Nazrul Islam, Chairman of the council and the RAKUB presided over the meeting. It was attended and addressed, among others, by RAKUB Managing Director AKM Sajedur Rahman Khan and council members Prof Rustam Ali Ahmed, Muhammad Idrish, Towhida Khatun and Chief Executive Officer of the company Abdullah Salah Uddin Gazi.

The meeting was told that the SME loan was disbursed among 2,564 entrepreneurs and recovered from 1987 entrepreneurs in 43 upazilas of Rajshahi, Chapainawabganj, Natore, Naogaon, Pabna, Sirajgonj, Bogra, Joypurhat and Kurigram districts.

The loans were disbursed with the main thrust of creating an intensive investment scope for the agro-based SMEs in the light of the government industrial policy and for supplementing the government’s efforts to attain food security and economic emancipation.