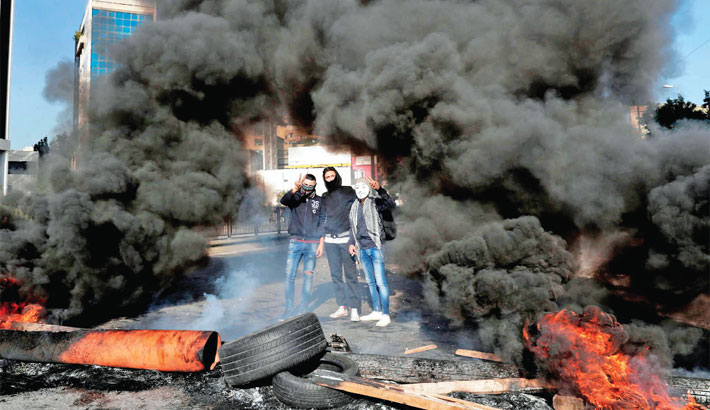 Lebanese protesters flash the victory behind a burning roadblock during ongoing anti-government demonstrations in Beirut on Tuesday. —AFP PHOTO

BEIRUT: Lebanese protesters resumed blocking major highways on Tuesday in what they said would be a “week of wrath” demanding an end to a nearly three-month political vacuum, reports AFP.

Although protests had declined in size in recent weeks, demonstrations have been ongoing since October, increasingly targeting banks and state institutions blamed for driving the country towards collapse.

The movement has been fuelled by a crippling economic crisis, the worst since Lebanon’s 1975-1990 civil war.

The unprecedented cross-sectarian protests led to the government stepping down in late October, but no new one has yet been formed as political parties argue over its composition.

As a liquidity crisis grows and the cost of living rises, protesters have returned to the streets to urge politicians to speed up the process.