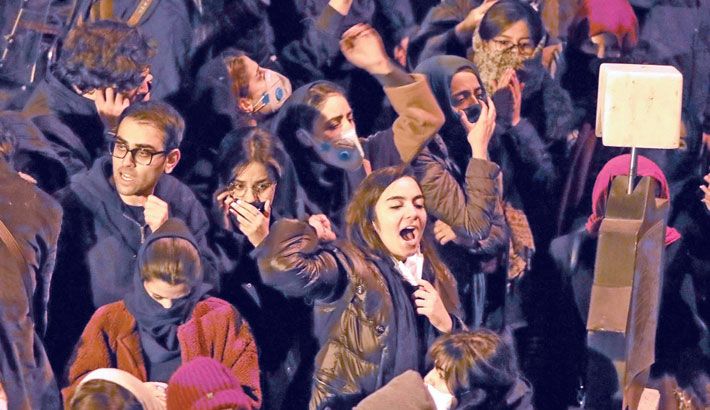 Iranians students chant slogans as they demonstrate following a tribute for the victims of Ukraine International Airlines Boeing 737 in front of the Amirkabir University in the capital Tehran, on Saturday. —AFP PHOTO

LONDON: Britain has condemned the arrest of the UK ambassador to Iran as a “flagrant violation of international law”.

Rob Macaire was detained after attending a vigil for those who died when Iran’s military shot down a passenger plane on Wednesday, reports BBC.

He left when it turned into a protest before being arrested and accused of helping to organise the demonstrations.

Macaire said he was attending the vigil because it was “normal to want to pay respects”, adding that some of the victims were British.

The ambassador added: “Arresting diplomats is of course illegal, in all countries.” Protesters had taken to the streets in Iran’s capital, Tehran, to vent anger at officials, calling them liars for having denied shooting down a Ukrainian passenger plane.

On Saturday, Iran admitted “unintentionally” downing the jet, three days after the crash that killed 176 people. Security Minister Brandon Lewis said on Sunday that the UK ambassador’s arrest was “totally unacceptable” and a breach of the 1961 Vienna Convention.