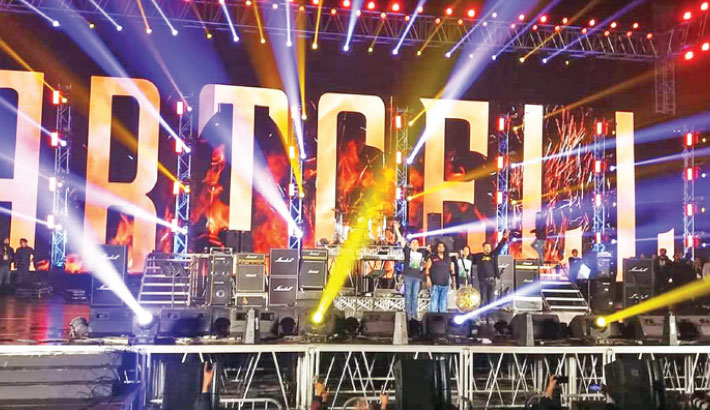 December 24 (2019) was an important day for the Bangladeshi rock music scene. It won’t be an exaggeration to call this day a historical day because it indeed stands as a landmark in the history of Bangla rock music. The mighty band Miles that is considered to be one of the pioneering rock bands of Bangladesh that had begun its legacy back in 1999 had celebrated their 40th anniversary at ICCB on this day. The iconic band Artcell that has helped shape up the country’s metal scene to be as awesome as it is today, first beginning in the UG scene back in 2009 and then erupting out of that zone with their power to prove the world that metal in Bangladesh can be mainstream too, celebrated their 20th Anniversary on the same day and coincidentally in the same venue!

While the epoch-making events themselves stand as jewels in the memories of the thousands and thousands of crowds who attended each or both gigs, there were multiple small-yet-profound incidents that had taken place which truly make both the concerts extremely special not only as anniversary events but also as grand rock celebrations. Both the concerts had others from the rock and metal scene performing in them making it kind of a rock reunion or metal party! The energy and camaraderie was superb!  In Miles’ celebration, five mainstream bands namely Feedback, Souls, Warfaze, Dalcchut and Vikings performed alongside Miles. It was truly nostalgic seeing them all sharing the stage. Talented bands Crunch, Mechanix, Naive, Powersurge, Trainwreck and Unmaad along with Rafa, Romel Ali, DRockstar Shuvo, members of Black, Dreek, Bay of Bengal, Shironamhin, Minerva and Reborn performed in Artcell’s celebration. The power and influence of Artcellism was evident among the audience present there. 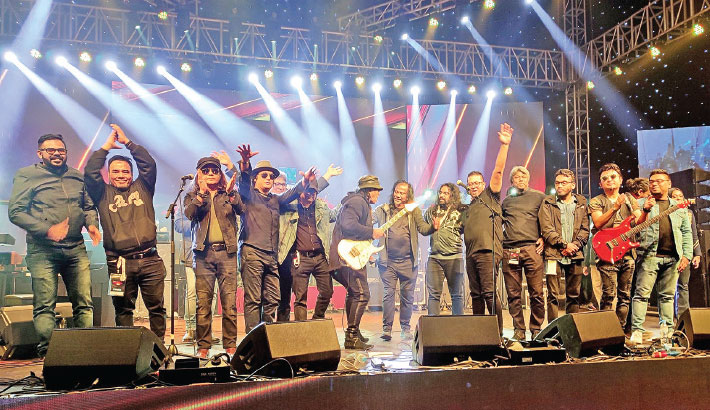 The crowd began to gather from around 3pm for the concert titled ‘20 Years of Artcellism’ while the show began at 6.00pm. Fans were thrilled to see the stars of the night --- Artcell members Lincoln, Cezanne, Faisal and Shaju. Since Cezanne and Shaju reside in Australia, this was the second occasion where fans saw live all four of them ever since Faisal joined the band in 2018 as the lead guitarist. Artcell started the concert with three of their popular numbers ‘Rahur Grash’, ‘Onnoshomoy’ and ‘Utshober Utshahe’. Adrenaline was high! Everyone loudly cheered, shouted and sang along to make their enthusiasm heard. One by one, other bands took the stage. In the end, Artcell paid a special tribute to the bands Rockstrata, LRB, Miles, Aurthohin and Warfaze. They gave a ground-breaking finish with their popular tracks ‘Oniket Prantor’ (with Bakhtiar of Bay of Bengal as guest artist) and ‘Chile Kothar Shepai’. Another special moment in the event was when former Artcell member Ershad Zaman wished the band good luck and thanked the fans for their support throughout the years.

In ‘Miles’ 40 Years Celebration’ concert, the stage was lit with hundreds of glittering lights that looked quite like stars in the night sky. The indoor venue saw people of varying age groups, all with big smiles on their faces. The hall was full as all the tickets were sold out a day ahead! The five legendary bands performed popular tracks of Miles one after another. It was beautiful to see something so unique. Miles’ song ‘Jadu’ performed by Dalchhut was mesmerizing. Feedback moved the crowd with “Valobesho Na.”  When Warfaze gave a tribute to Miles with their song “Shesh Thikana”, the crowd roared out loud. Setu Chowdhury from Vikings said, “I grew up listening to Miles. We, Vikings, are truly honored to be a part of this milestone celebration of Miles.” Souls’ tribute with ‘Gunjon Shuni’ was full of life.

Miles took the stage around 8.30 pm after their performances. At this point, audiences’ zeal reached a crescendo! With a power-packed performance of ‘Pahari Meye’ they performed many of our favourite tracks one after another. In the end, all the bands took the stage together for the performance of the much anticipated ‘Firiye Dao.’ It is mentionable that ‘Miles’ 40 years celebrations’ had begun much earlier in the USA where they had performed around 18 concerts, then traveling to Canada, Australia and finally back to the homeland in Bangladesh. The band also collected funds in association with Jaago Foundation to support underprivileged children.