An Initiative Worth Appreciating 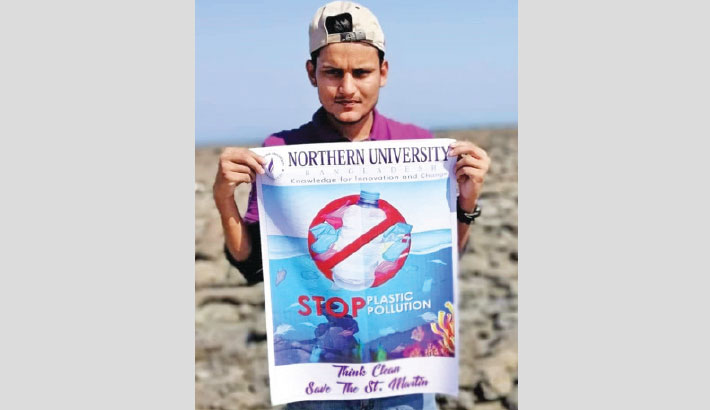 St. Martin's is a small island located in the northeastern part of the Bay of Bengal, about 9 km south of the tip of the Cox's Bazar-Teknaf peninsula. The only way to reach St. Martin's Island is through waterways --- boats and ships (mostly for tourists) from Teknaf. The only internal transport for commuting within the island is non-motorized van (pulled by man).

Owing to its scenic beauty it has turned into one of the most popular tourist destinations. Not only natives but also foreigners throng this tourist spot all year round. However allegations have always been rife as far as maintaining and managing this tourist attraction is concerned. There is a wide accusation against the visitors as well that they litter the spot by throwing trashes indiscriminately.

Despite the fact that tourists in most of the cases are to be held responsible for making the spot dirty, a group of students, of late, have tried to make a difference through an exceptional initiative. A group of students, under the supervision of four teachers, visited the Saint Martin’s Island from 11-13 December 2019. The excursion was arranged by the ‘Computer Club’ of Northern University Bangladesh. However this time the aim of the study tour was quite different as those students formed a human chain there while protesting the ongoing pollution on the island and conducted a cleanliness drive there as well. Inspired by the slogan ‘Think Clean, Save the St. Martin’, they picked up plastic bottles and other debris from different spots on the island and placed the trashes in the bins. Such a campaign drew widespread appreciation from the tourists. 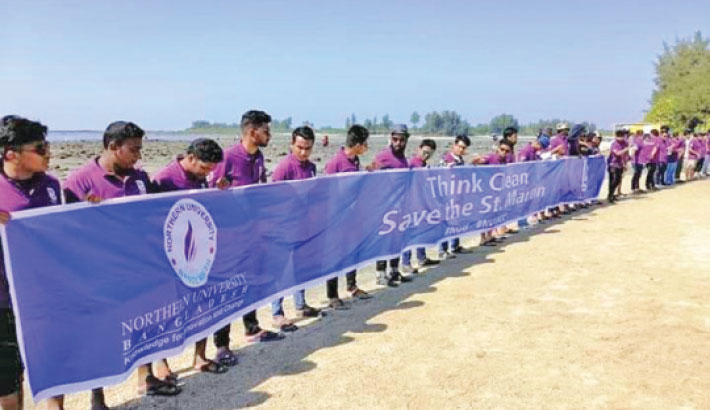 Muhammed Samsuddoha Alam, an assistant professor and one of the organizers, said about this initiative, “We ruin nature while sightseeing. We throw plastic items which don’t decompose in soil here and there. Consequently these plastic things are polluting the island and putting the ecological balance of the ocean in jeopardy. We must be cautious so that the sea, nature and the beauty of the island are not destroyed owing to our reluctant attitude.”

Saddam Hossain, a student and one of the campaigners, shared, “We planned this tour in a different way right from the beginning. If the youths don’t become conscious and make others aware of the harmful impacts of such a bad practice, then the habit of polluting the ocean will go on unabated. So, we have thought of forming a human chain and conducting the cleanliness drive with a view to raising awareness on the issue.”