Number of asthma, pneumonia patients on rise in Ctg hospitals 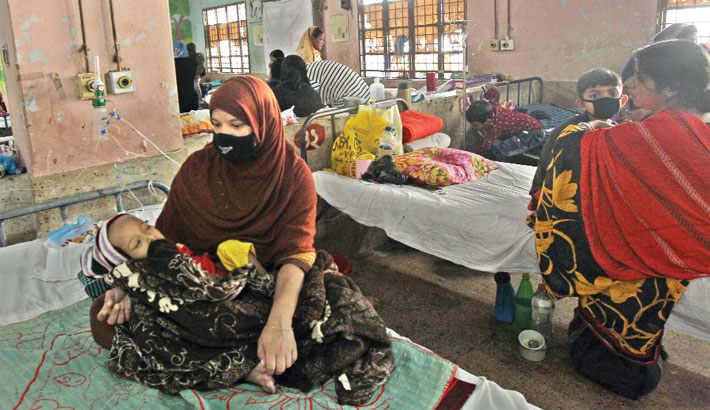 A mother is seen with her baby undergoing treatment for cold-related disease at Child Health Ward of Chattogram Medical College Hospital (CMCH). The photo was taken on Tuesday. — SUN PHOTO

The number of patients suffering from various cold-related diseases, including asthma and pneumonia, is increasing due to the cold weather over the last one week in Chattogram.

The port city experienced a mild cold wave like elsewhere around the country during the period.

Government and private hospitals including Chattogram Medical College and Hospital (CMCH) are receiving a huge number of patients beyond the seat capacity.

According to the Health department, 438 people were affected with diarrhoea while 145 suffered from respiratory problem over the last week in Chattogram.

Source said people are being affected with the diseases due to low temperature, cold wave, fogs and dusts in this season.

CMCH authority said they are dealing with three times more patients compared to normal ones.

The ward for children is providing healthcare service to some 360 patients against its capacity of 66 seats, they said.

A huge number of patients also gather at outdoor of the hospital for treatment creating much pressure on the doctors and medical staff of the CMCH.

Children are the worst sufferers of these cold-related diseases like pneumonia and diarrhoea as they lack sufficient immunity for disease.

While visiting Anderkilla General Hospital, this correspondent found several hundred patients were receiving treatment at Outdoor. Some 250 to 300 children were seen rushed there with pneumonia, diarrhoea, cough and other cold-related diseases.

Maa Shishu O General Hospital, a specialised hospital for children, is also providing service to around 500 patients against the capacity of 250-seat at the hospital.

The number of patients is also being increased at different private hospitals in the city, they said.

Parveen Akhter, who came to the General Hospital with her child affected by diarrhoea, said her child was with sound health and playing at home till Sunday.

“My baby was suddenly affected with diarrhoea on Monday and brought to the hospital for medication,” she said.

Moreover, homeless people living under the open sky and public places like bus and railway stations are also falling victim to the cold weather.

However, the administration took initiative to distribute blankets to the poor people from Prime Minister’s relief fund.

Government allocated 94,300 pieces of blanket for 15 upazilas of Chattogram district and those will be distributed at every union of the upazilas, said the sources.

“In spite of having insufficient doctors against the patients, we are trying our best to serve the patients,” he said.

Contacted, Child Specialist Dr Dhiman Chowdhury of the CMCH said the number of children is higher among the patients being taken to the hospital with cough, viral fever, asthma, diarrhoea, allergy and other cold-related diseases.

“We noticed that the diseases pneumonia, allergy and diarrhoea increased in this season due to much cold and dust,” he said.

People should avoid cold and dust by wearing warm cloths and mask, he suggested.

Dr Dhiman also said that people should not delay to consult with the doctors after being affected by the diseases.

Meteorologists said the temperature in Chattogram is lower than the expected one in this month.

The Met Office said the average temperature of Chattogram was supposed to be 15.6 degree Celsius in December. But, Chattogram witnessed 13.3 degree in this week.

The highest temperature was expected to be 27 degree while it was found 22.7 degree in this month, they said.