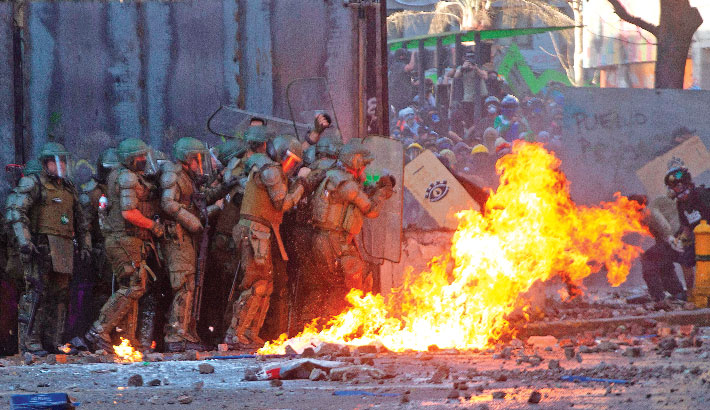 Riot police are reached by a petrol bomb during a protest against President Sebastian Pinera’s government in Santiago, Chile, on Friday. – SUN PHOTO

SANTIAGO: The UN has accused the Chilean police and armed forces of committing serious human rights violations in their response to recent mass demonstrations, reports BBC.

It notes 345 people have suffered eye trauma from pellets, with torture and sexual violence also highlighted.

Some 1,600 people remain in pre-trial detention out of 28,000 detained since mid-October.

Protesters are demanding social reforms and changes to a constitution that dates back to the pre-democracy era of the late military leader, Augusto Pinochet.

At least 26 people have been killed and hundreds injured in the unrest.

The report by the UN human rights office said official Chilean figures of more than 4,900 people injured in the demonstrations were disputed and other sources had far higher estimates.

The UN documented 113 specific cases of torture and ill-treatment and 24 cases of sexual violence against women, men and adolescents by members of the police and army.

The UN team noted the “unnecessary and disproportionate use of less-lethal weapons” such as anti-riot shotguns and tear gas.

“We have found that the overall management of assemblies by police was carried out in a fundamentally repressive manner,” Imma Guerras-Delgado, UN mission team leader, told a Geneva news briefing.

The protests were triggered by an announcement that public transport fares would rise in the capital, Santiago.

Demonstrations quickly spread across the country and grew into a general revolt against inequality, the high price of healthcare and poor funding for education.

Harsh repression by the security forces further stoked the anger of those protesting as did the response by President Sebastián Piñera, who declared a state of emergency and said the country was “at war”.

The current constitution came into force in 1980 when the country was still under military rule.