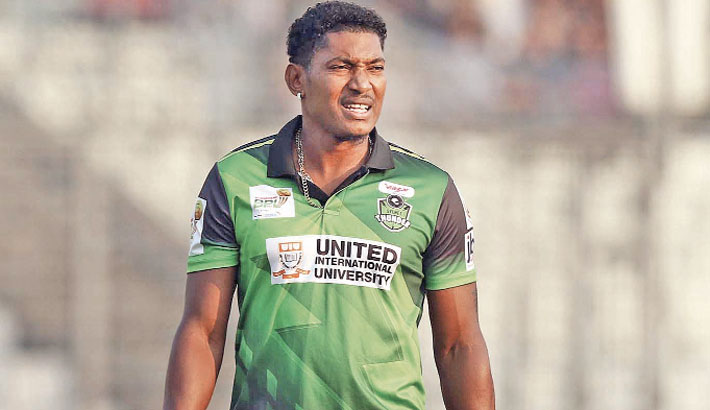 Sylhet Thunders controversial pace bowler Krishmar Santokie made it into the playing eleven against Rajshahi Royals despite raising quite a few eyebrows in Bangabandhu Bangladesh Premier League opener.

Sylhet Thunders team director Tanjil Chowdhury revealed that they have requested Bangladesh Cricket Board (BCB) to investigate the wide and no-balls bowled by Krishmar Santokie in his opening over against Chattogram Challengers in the first game of ongoing BBPL at Sher-e-Bangla National Cricket Stadium on November 11.

There was apprehension whether he will be picked for the second game after fingers were pointed towards him but Royal’s team management seemed to think otherwise when they took on Rajshahi Royals.

Santokie bowled a huge wide in his third delivery but the no-ball that he bowled two balls later also cannot be ignored as if it’s part of the game considering the length of his overstep. BCB appointed seven board directors to be involved with respective teams which are sponsored by different business house for the special edition of BBPL.

BCB is organizing the special BBPL to mark the birth anniversary of the Father of the Nation Bangabandhu Sheikh Mujibur Rahman after cutting ties with the franchises citing that the franchises were making unreasonable demands.

Tanjil, who has been given the charge of Sylhet Thunders, said that he doesn’t feel too good about the no-ball and the wide-ball and verbally requested BCB and ACU to investigate the matter.

“The no-ball that he bowled is suspicious,” said Tanjil. “He (Santokie) is not yet called by BCB but I have lodged my complaint. I verbally requested CEO and Morshed (BCB anti-corruption head) to investigate the matter (no ball),” he said.

“We (BCB director) don’t have anything to do with the playing eleven. It is up to the management and the coach. I asked the sponsors whether they interfered in the playing eleven and they are refusing to say anything. Now I have to talk to the team management and know whether anyone influenced them to field Santokie because it seems he is associated with spot fixing,” said Tanjil. Tanjil rang the alarm bells about the sponsor (Jivani Footwear Company) and said that he is quite doubtful about their activities since the day of the player’s draft.

“They have brought a cricketer called Santokie and he bowled a huge no-ball and a massive wide-ball. It was something that I was afraid of,” said Tanjil.

“On the day of the players’ draft there was lot of conflict between us. Me and team director Sarowar Imran was convinced about certain decision. Sponsors were insisting on taking few cricketers and we were not sure why they are insisting to pick those cricketers. We had the chance to pick Nayeem Sheikh and other super-stars. But they preferred to pick players like Sohag Gazi and Santokie. That is the reason we started doubting them. I have informed BCB governing council members and BCB President in paper about my apprehension. I have even informed Mahbub Anam. At that point they (BCB) have called them and cautioned them. We have picked few cricketers outside the draft. But players like Santokie are picked by the sponsors and they communicated with their agents all by themselves,” he said.

Tanjil also raised question about the integrity officer (ACU official) that is staying with Thunders team.

BCB instructed that every team will have an ACU officer in order to prevent corruption but according to Tanjil doubts still persist whether he (present ACU official in Thunders) is the right person for the job or not.

“When we wanted to know about his background he said that he is an engineer. I asked then how come he is here and he replied that he is working with ACU for last four years,” said Tanjil. “We are not convinced with his reply. We are keeping in touch with BCB regarding every development,” he concluded.

According to Thunders media officials, Jivani footwear owner Mohiuddin Moyeen is not ready to make any comments in this regard and will soon come up with an explanation in the coming days. Alarm bells went off across the cricket world on BPL’s opening day. Social media was understandably abuzz, with the image of Sylhet Thunder bowler Santokie going over by several inches during their match against Chattogram Challengers in Dhaka being shared around.

BCB’s Chief Executive Officer Nizamuddin Chowdhury said that that the board wouldn’t make a public comment on the matter, but he did mention the steps that have already been taken to safeguard the tournament against corruption.

“As you know, we have deployed more (anti-corruption) personnel in this tournament (one with each team), but about this matter we can’t really make a comment as this is still an internal issue at this stage,” Chowdhury was quoted in a cricket website.

To make matters worse, Santokie’s was run-out in a bizarre manner on Friday which also gave more fuel for suspicion.