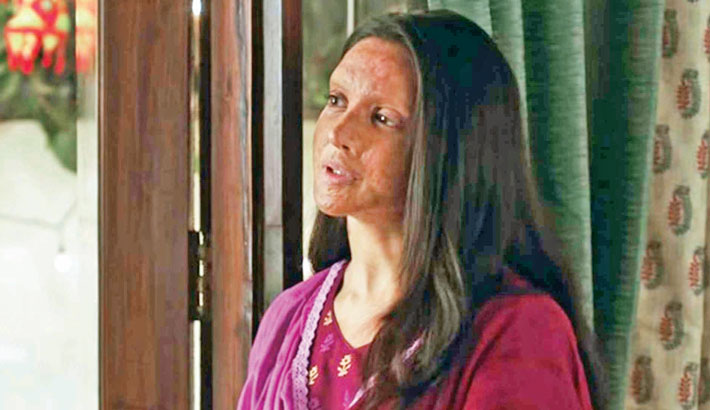 The wait is over. After almost a two-year break since 2018's Padmaavat, Deepika Padukone is all set to return to the big screen with Chhapaak. The trailer of the film has just been launched on Monday.

Deepika is playing the role of acid attack survivor Laxmi Agarwal in Chhapaak. The trailer shows the journey of Malti (Deepika's character in the film). How she hates her face after the attack and learns to love it. The trailer also shows how Malti leads a campaign to prevent acid attacks in the country by regulating the sale of acid, reports India Today.

The trailer of Chhapaak also shows how Amol (Vikrant Massey) helps her in this struggle to get the sale of acid banned. Glimpses of Amol and Malti's brewing love can also be seen in the trailer.

Deepika shared the trailer saying, "Rarely do you come across a story where you do not need an entire narration to decide if you want to be a part of a film or not.What is even more rare is to not be able to articulate and put into words what you feel for the film and it’s journey... Chhapaak is all of that and more for me... Presenting the trailer of #Chhapaak."

In the trailer, Deepika's character Malti exhorts people to fight against the sale of acid. '#AbLadnaHai' is the hashtag we see as the trailer ends.

Laxmi Agarwal was attacked in 2005, when she was just 15 years old. The attacker was a 32-year-old man who was trying to make advances towards her. Laxmi battled for life after the attack. After surviving the attack, she started a campaign called Stop Sale Acid to regulate the sale of acid in the country. Deepika, who also turned producer with Chhapaak, earlier took to Instagram to share her first look in the film.

Chhapaak is directed by Meghna Gulzar. Deepika had to wear prosthetics to play Laxmi's role. At the trailer launch of Chhapaak, Deepika broke down on stage when asked to speak about the film.

Chhapaak will hit the theatres on January 10, 2020. The film will clash with Ajay Devgn's Tanhaji The Unsung Warrior at the box office.