BBPL: the movie in the making 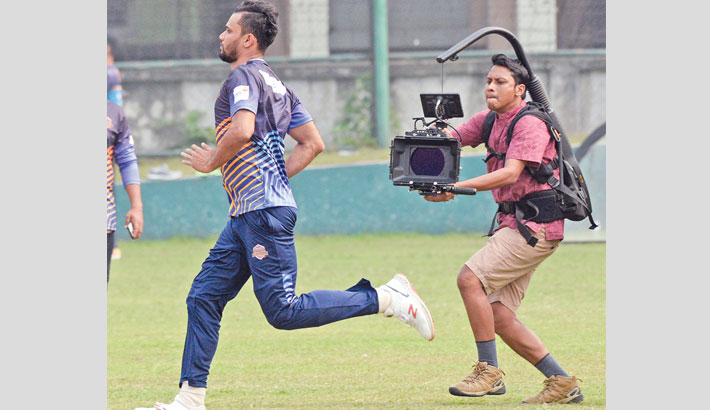 Dhaka Platoon skipper Mashrafe Mortaza bowls as Platoon’s cameraman follows during a practice session at the academy ground of Sher-e-Bangla National Cricket Stadium in the capital on Monday.

Just before every edition of Bangladesh Premier League country’s cricket fraternity is crowded by outsiders and it was no indifferent this time round too.

The stage is all set to start the special edition of Bangabandhu Bangladesh Premier League (BBPL) after the grand opening ceremony at the Sher-e-Bangla National Stadium on December 8.

Cricketers of the seven teams participating in this edition of the tournament are gathering thick and fast in the BCB academy premises to utilise the allotted two hours in the middle.

Every now and then new foreign cricketers and coaches are coming into the academy with some officials taking them to their respective dressing rooms where they get a chance to know with whom they will share the dressing room for the next one month.

The security increases inside the SBNS premises while the long queue of the net bowlers who had to fight out to enter the academy crossing the security barrier and sitting in the sidelines eyeing for an opportunity only indicates that arrival of the Twemnty20 extravaganza.

The new addition in the line-up seems to be the introduction of the camera person in the midst of the practice session.

The way videographer of Dhaka Platoons roamed inside the academy premises never looked to be a proper training session rather it appeared that a shooting is taking place.

Several people from the production gathered together in front of the dressing room that looked odd to say the least.

It looked quite odd when the videographer chased Mashrafe Mortaza from the start of his run-up till the delivery as this kind of things is only seen in the movie sets while doing a song number.

“Is it over or they (videographer) will be doing this all through a practice,” a member of the Platoon unit gushed in sheer irritation knowing that they have hardly anything to do apart from being part of the cinema.

The walkie-talkie men are starting to pour inside the premises in abundance as the teams are eyeing for high scale security and along the way other elements are making it jammed for the cricketers to make a perfect preparation for the tournament.

While it was nothing new for the Bangladeshi cricketers and officials, it came as a blow for Mark O Donell, the New Zealander who joined Rangpur Rangers as the head coach and had the opportunity to oversee things in his first day at the office. 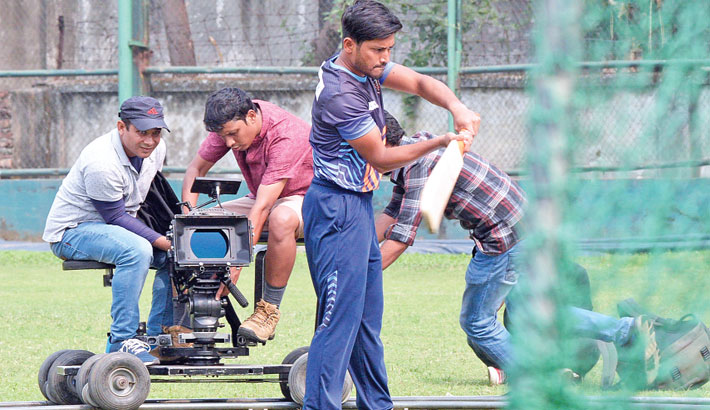 Dhaka Platoon batsman Anamul Haque is being filmed during a practice session at the academy field of Sher-e-Bangla National Cricket Stadium in Mirpur on Monday.

“We actually had a very good training season. It is a very tight schedule. You have got six teams practicing here. We have to get a 2-hour window and use it well,” Mark told reporters on Monday.

“We have got six teams practicing here and some spectator. We are worried people are going to hit in these situations I have never got any ground where so many teams practice together in such a short space of time,” he said.

Before the start of BBPL, BCB has told that every team must have a leg-spinner and quick bowler in their side but BCB funded teams Comilla Warriors did not follow those rules in their side.

Minhajul Abedin Nannu, Bangladesh’s chief selector who has been appointed Cumilla’s technical advisor, disagreed, propping up Afghanistan finger spinner Mujeeb Ur Rahman, who bowls a mixed bag of deliveries including a right-hander’s leg break, as their leg-spinner.

“We have picked Mujeeb, who is a world-class spinner, which fulfills the requirement. He bowls both leg spin and off-spin, and he is a great bowler. So that’s not going to be a problem,” he said.

Akram khan director of Rangpur Rangers do not believe every team have to play a leg-spinner in their side though they signed Rishad Hossain, the 17-year-old who has done well in first-class cricket recently.

“It is not mandatory to play a leg-spinner, but we have some really good bowlers like Mustafiz (Mustafizur Rahman), Taskin Ahmed, Mohammad Nabi and Arafat Sunny, as well as Lewis Gregory, who is a pace-bowling all-rounder,” Akram said.

Whatever the case country’s cricket fraternity is now completely immersed to be part of BBPL after the gala opening ceremony of the BBPL, almost forgetting the perennial defeat sequence what began just after the World Cup.

The fans, who just a few days ago, criticised the team, tried to teach the players how to be focused on Test cricket or other cricket, now lined up for tickets of the gala opening ceremony and the BPL matches.

After all the movies is all set to start after the trailer in the form of the opening ceremony.