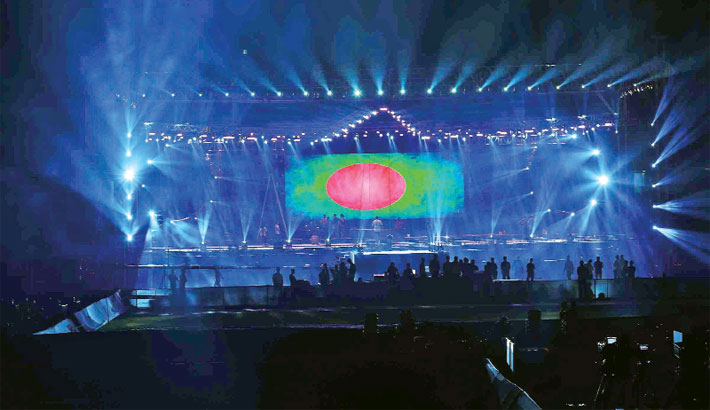 Bangabandhu Bangladesh Premier League T20 which will mark the start of celebrations of the birth centenary of Father of the Nation Bangabandhu Sheikh Mujibur Rahman is all set to raise its curtain at Sher-e-Bangla National Cricket Stadium (SBNCS) in the capital on Sunday with a grand opening ceremony sponsored by Bashundhara. 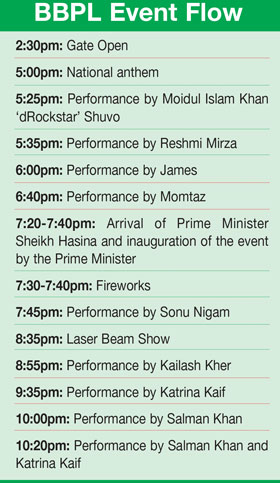 The six-hour long program will be inaugurated by Prime Minister Sheikh Hasina and Bangladesh Cricket Board (BCB) is leaving no stone unturned to make this program a memorable one with the gates opening at 2:30pm and the programme starting two hours later.

BCB on Saturday gave a glimpse of what is expected to be staged by putting up a rehearsal of the show at SBNCS premises with local artists after the sunset which included dancing on the folk music remix with colourful lighting all around.

From the early morning, BCB premises was populated with security agencies’ personnels as they were taking care of the security aspect of things and making sure that things run smoothly.

Prime Minister Sheikh Hasina is expected to arrive at 7:00pm and afterward the program will be inaugurated by her as she will play a short film on Bangabandhu.

Nine giant screens are placed in and around the stage that will host one of the biggest events ever held in Bangladesh as leading performers of the subcontinent will perform.

The tournament proper, with participation of seven teams, will however roll into the ground from Wednesday at the home of cricket.

Bollywood superstar Salman Khan and Katrina Kaif are being seen as the main attraction of the ceremony that is going to last for almost five-long-hours while firework will also be an added attraction.

“The Indians (singers) will come in a while to rehearse. Now, we will test the fireworks,” he said adding that Indian singer Sonu Nigam will sing a song on Bangabandhu

“I have sent Sonu Nigam a song on Bangabandhu, he will start with that. This time, the audience will feel a different ambiance altogether,” he said.

Shohel said that they are expecting a full house as people will be able to enjoy the program at cheap price.

“Salman Khan and Katrina’s manager asked me why I would be selling their tickets at such low cost. Our VIP ticket is priced at ten thousand taka, tickets of functions which featured them had never been sold at such low price in Bangladesh’s history,” said Shohel.

“Previously, Shahrukh Khan and Salman Khan came to perform at Bangabandhu National Stadium and the tickets of that function were sold at the range of fifty to sixty thousand taka,” told Shohel. BCB CEO Nizamuddin Chowdhury said that they were all but prepared to host the gala event and had divided the programme in two parts as it will be a six-hour long programme.

“Our logistics and stage preparations are going on. All of you know that Prime Minister gave her consent to be present in the ceremony and inaugurate the tournament. So we are taking security arrangements accordingly,” Nizamuddin told reporters in Mirpur on Saturday.

“We are expecting all the performers to arrive within today (Saturday) or the first half of tomorrow (Sunday). It will be a cultural programme. We have divided the programmes in two sections,” told BCB CEO. “All the players are invited to attend the programme. But there will be no special segments featuring them as we see during the opening ceremonies of many franchise-based cricket leagues,” he concluded.