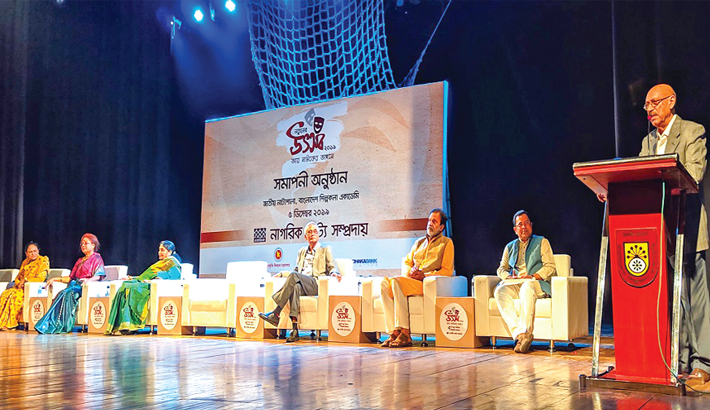 The festival featured seven new plays, each staged for the first time from 29 November to 5 December, every evening at Bangladesh Shilpakala Academy (BSA)’s National Theatre Hall.

A concluding ceremony was arranged at the venue prior to the staging of the closing play ‘Lottery’, directed by Mostafiz Shahin. The play featured visually impaired actors on stage, with actor-director Sara Zaker being the dramaturge.

About the festival, Abul Hayat, who attended on behalf of Nagorik Natya Sampradaya’s Chairperson Aly Zaker, said “Nagorik started as the first theatre group in Dhaka which initiated the trend of theatre shows with ticket- for the sake of the survival of theatre artists. These past seven days, seven successful plays were staged with an unimaginable number of crowd who stood in line for tickets. We all are really happy for the support and also glad to honor these four legendary ladies in Bangladesh’s theatre sphere.”

Director Pantha Shahriar who received massive acclaim for his new play ‘Kalo Joler Kabbo’, inspired by William Shakespeare’s play ‘The Merchant of Venice’ featuring legendary actor Asaduzzaman Noor, told UNB that the response of the crowd in this festival was overwhelming.

The festival commenced on 29 November with state minister for cultural affairs KM Khalid as the chief guest at the inaugural ceremony.