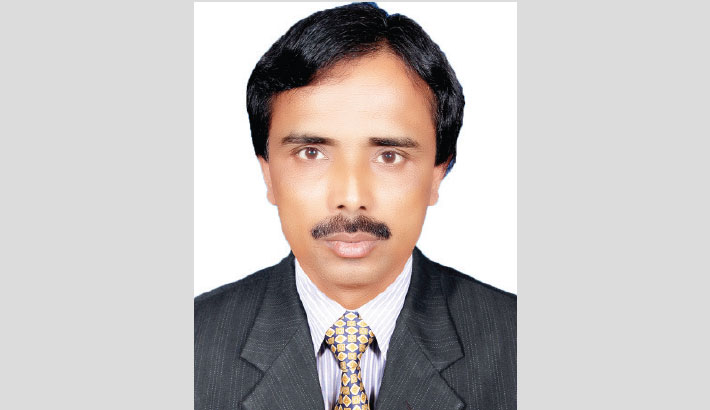 When I look back at my childhood, to my utter surprise I could easily figure out that I was blessed by a group of outstanding teachers who were truly dedicated to their profession and could do anything and everything for the wellbeing of their students. They felt from their hearts that they are our guardians. Thus they always inspired us to follow high ideals in life. Habibur Rahman Bornali was one of those luminous teachers who took an oath to bring about a meaningful change in the society. We fondly called him ‘Bornali Sir’. He was our art teacher. No matter whatever the medium (be it chalk, crayon, pen, pencil or painting brush), his aptitude as an artist was unparalleled. And he had that wonderful ability to arouse inquisitiveness among his students about various forms of arts and painting. We used to wait for his classes as his classes were full of fun. He never put burden on his students rather he allowed them to enjoy his classes. With such an approach he successfully sowed the seed of creativity in us. 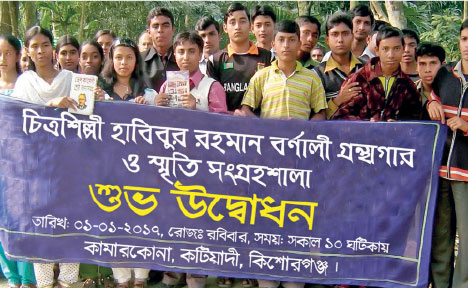 Habibur Rahman Bornali was a senior teacher of Katiadi Adarsha Bidya Niketon. He was involved with this first kindergarten school of our locality since its inception. Apart from being a teacher, Bornali Sir was an artist, designer, lyricist, singer, tabla player and a theatre activist. He composed theme songs and designed campuses for a number of educational institutions. He often sang songs with his beautiful voice. Albeit he was not an expert tabla player, he played tabla during rehearsals and main programmes of our school as well. Bornali Sir was a great organiser. He was the general secretary of Shushashoner Jonyo Nagorik (Shujon) and Nirapod Sharak Chai’s Katiadi chapter. Besides, he arranged everything efficiently to make our school functions a success. Especially his role as a theatre activist was momentous for our school’s theatre troupe. He used to monitor our rehearsals and distribute photocopies of the scripts among the actors. Still I can recall that when we went to perform a play in a nearby village called Boalia, he arranged everything, including foods and transportation, for us.

When I was studying in Katiadi Pilot Boys High School, he was elected as a governing body member of the school. Till then our school never arranged any study tour. But within a few days of his victory in the governing body’s election he almost single-handedly arranged a study tour to Sherpur’s Gajni Obokash Kendro for us. Some of the teachers and guardians were hell bent on foiling this plan as they opposed the idea of spending a good amount of money from school fund for such a tour and questioned the security measures of the students during the tour, but our teacher was firm in his decision. He managed everything by coordinating the allocated money from the school fund and the money donated by the students and the teachers. He convinced everyone by delineating the significance of exploring the world outside the classrooms for the greater welfare of the students. And consequently, the study tour turned into a marvelous experience for us.

Moreover Bornali Sir was a superb motivator and a caring fatherly figure. He knew the strengths and weaknesses of his students better than anyone else. When we used to participate in various sports and cultural competitions, he suggested us to choose our favourite events. His inspiring words always helped us to recognise and realise our worth. He categorically analysed the performances of our opponents and specified the areas where we needed to improve to beat them. He was such a kind of personality who could never be ignored by anyone. He was a smart orator who could easily become the center of a discussion by attracting everybody towards him by dint of his excellent choice of diction and soothing voice. The best thing about him was his style of encouraging his students.

Habibur Rahman Bornali was one of those patriots who decided to spend their prime time of life for preparing the next generation in the best possible way. He was well ahead of his time and that’s why instead of continuing his government job he returned to his village and joined teaching without choosing any other profession for ensuring a better standard of life. He was committed to doing something for the society. And in the process he established Habibur Rahman Bornali Library and Memorial Museum and Bornali Model Shishu Niketan in his birthplace Katiadi’s Kamarkona village under Kishoreganj district. His three children Mozammel Hoque, Tania Nasrin and Mahabubur Rahman are directing them now. In the very literal sense Bornali Sir had coloured our life just like his name. Born on November 23, 1962, this selfless teacher embraced an untimely death on July 19, 2017, at Jahurul Islam Medical College and Hospital following a fatal road accident. On the occasion of the 57th birth anniversary of my beloved teacher, I would like to pray for his departed soul.