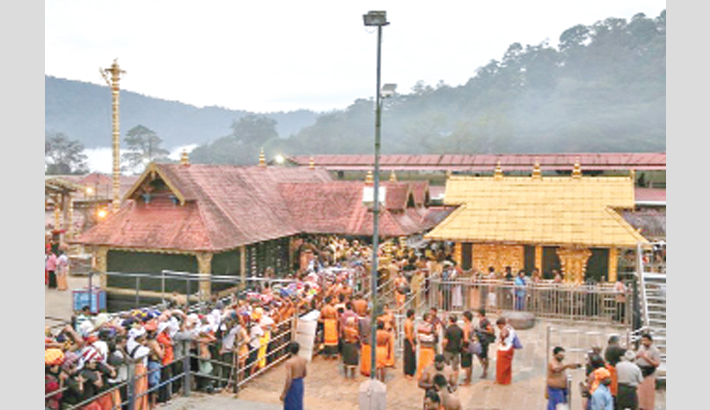 A five-judge bench last year ruled that keeping women out of the Sabarimala shrine in the southern state of Kerala was discriminatory. The verdict led to massive protests in the state.

Women who tried to enter the shrine were either sent back or, in some cases, even assaulted. The move is likely to anger women who fought hard to win the right to enter the temple. Hinduism regards menstruating women as unclean and bars them from participating in religious rituals.

Many temples bar women during their periods and many devout women voluntarily stay away, but Sabarimala had a blanket ban on all women between the ages of 10 and 50.

On Thursday the five-judge bench, responding to dozens of review petitions challenging the court’s landmark judgement last year, said that the matter would now be heard by a larger bench.

In doing so, however, it did not stay its earlier order. This means women can still legally enter the temple. But it’s not going to be easy for them.

A temple official welcomed the ruling and appealed to women to stay away. Women trying to enter the temple after the verdict last year were attacked by mobs blocking the way.