Says US businesswoman on alleged affair with UK PM 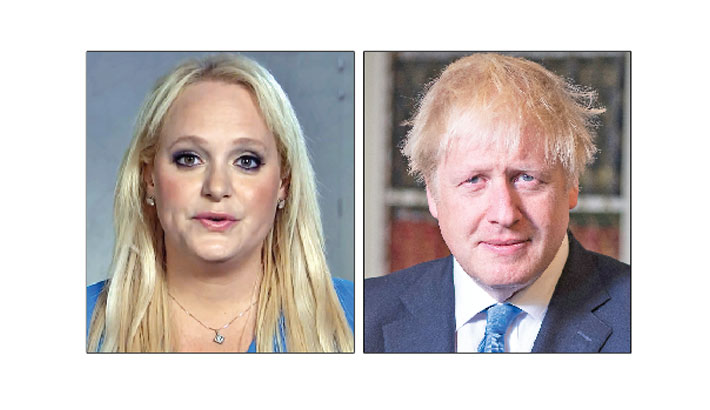 LONDON: A US businesswoman at the centre of controversy over whether Boris Johnson showed her inappropriate favouritism amid an alleged affair said on Sunday she had been left “heartbroken” and “humiliated” by the British prime minister, reports AFP.

Jennifer Arcuri, who is accused of getting privileged access to foreign trade jaunts and grants when Johnson was previously London mayor, told Britain’s ITV he was treating her like “some fleeting one-night stand”.

The technology entrepreneur said the British premier, now campaigning for re-election, had rebuffed her requests “for advice” after the scandal erupted in September.

“I’m terribly heartbroken by the way that you have cast me aside like I am some gremlin,” Arcuri, addressing Johnson directly, told ITV’s Exposure programme, according to excerpts given to the Press Association ahead of its broadcast on Sunday.

“I don’t understand why you’ve blocked me and ignored me as if I was some fleeting one-night stand or some girl that you picked up at a bar because I wasn’t—and you know that,” she added.

“I felt so disgusted and humiliated that I was told bigger things are at stake, never mind you.” Johnson, who was London mayor from 2008 to 2016, is battling for a five-year term in Downing Street in next month’s hotly-anticipated general election.

The show alleges the pair had an affair for more than four years, though Arcuri refused to confirm this.

The 34-year-old, who is now based in the United States but was photographed in London on Friday, admitted to ITV she had received mixed advice on what to say publicly about their relationship.

“When the story broke half the people that reached out told me to categorically deny, deny, deny,” she said. “The other half told me to, admit the, er, affair, fall on the sword get it over with.” Johnson, 55, was married at the time of the alleged affair but has since left his wife following a romance with a former Conservative party spin doctor Carrie Symonds. The pair now live together in Downing Street.

He has previously said he did not have the kind of relationship with Arcuri that required him to notify watchdogs of a potential conflict of interest, as required.