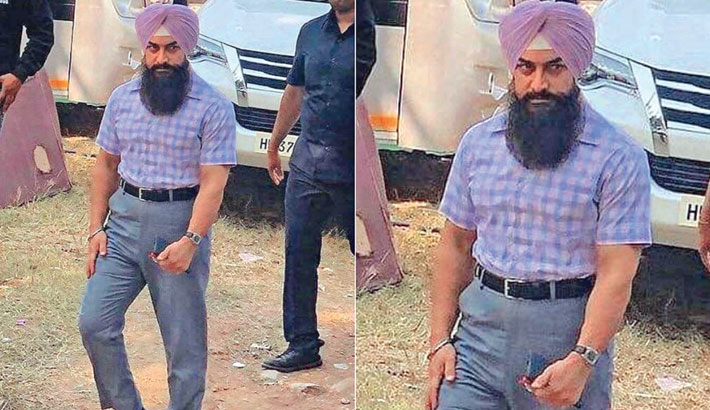 Aamir Khan, who will be next seen in Laal Singh Chaddha was recently spotted in his character from a leaked still from the film. The actor was seen sporting a lilac Sikh turban and a heavy beard, which is winning hearts all over the internet, reports India Today.

The actor was seen in a white checked shirt and high-waisted jeans. Khan is known for being a perfectionist and never shying away from authentic transformation.

Likewise in Dangal, the actor gained weight to look aged and then lost 20 kilos to play the younger version in the film.

Seeing the actor prepare for the role so well, people left encouraging comments on the picture. “Actor ho to aisa (if you wish to be an actor, be like him”), wrote on the fans, while another said, “Wow he looks so handsome as a sardar !! Couldn’t even recognize him.”

Laal Singh Chaddha is the official remake of Forrest Gump starring Tom Hanks. The actor released the first look teaser of the film, which showed the iconic feather flying in the sky, exactly like the 1994 film.

Earlier, a still of Kareena Kapoor from the film’s set had also leaked. She could be seen wearing a baby pink kurta suit in the picture. The actress, who was asked by Aamir Khan himself to take up the role in the film, recently opened up about it at a recent interview. “Because knowing the way that he (Aamir) is, I think he wanted to be like 100% sure. So very randomly, out of the blue, I got a call from Aamir. ‘I want you to hear this film, this and that and I am very excited about it.’ So it just happened very organically.

I heard the script like just then the minute he called me and he was just like let’s read some scenes. I want you to read some scenes. So I was like yeah, I have never done something like this. I thought like what the hell. I want to see myself if I want to do this or not and you know there is nothing wrong in that,” the actress said.