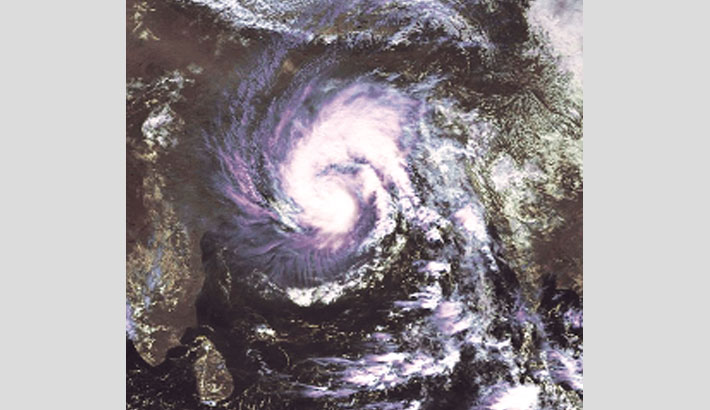 The severe cyclone ‘Bulbul’, which was intensifying over the Bay, was heading towards the Bangladesh coast and might hit West Bengal and Bangladesh today, Met office said.

Meanwhile, the Met office in Bangladesh has issued danger signal no-7 for Mongla and Payra seaports, signal-6 for Chattogram and signal-4 for Cox’s Bazar.

“It is very likely to re-curve northeastwards and cross West Bengal -Bangladesh coasts between Sagar Islands (West Bengal) and Khepupara (Bangladesh), across the Sundarbans delta by Saturday midnight as a severe cyclonic storm with maximum sustained wind speed of 110-120kmph gusting to 135kmph,” the IMD also said.

Under the influence of the storm, the low-lying areas of the coastal districts are likely to be inundated by storm surges of 4-5 feet height.

Chattogram, Noakhali, Laxmipur, Feni, Chandpur and their offshore islands and chars will come under danger signal-6.

The coastal belts of the districts are likely to experience wind speed up to 90-120kmph in gusts or squalls with heavy-to-very heavy falls during the passage of the storm.

All fishing boats and trawlers over the North Bay and deep sea have been advised to take shelter immediately and will remain in shelter until further notice.

Under the peripheral influence of ‘Bulbul’, gusty or squally wind may affect the maritime ports, North Bay and coastal areas of Bangladesh, meteorologist Abdur Rahman Khan predicted.  “Maximum sustained wind speed within 74kms of the severe cyclone centre is about 100kph rising to 120kph in gusts or squalls. Sea will remain very high near the severe cyclone centre,” he said.

Light-to-moderate rain and thundershowers accompanied by temporary gusty and squalls are likely to occur at many places over Khulna, Barishal and Chattogram divisions and at a few places over Rajshahi, Dhaka, Mymensingh and Sylhet divisions and at one or two places over Rangpur division with moderately heavy-to-heavy falls at places over the southern part of the country, the BMD forecast.

The authorities have suspended all sorts of activities at three maritime ports and inland water transportation as the cyclonic storm ‘Bulbul’ is moving towards the country’s coastal belt.

After the Met Office raised the warning level at Mongla and Payra ports to danger signal No. 7, and No. 6 at Chattogram on Friday evening, the authorities suspended operations at the three ports.

All the ships have been asked to move from the jetties to the outer anchorage.

Bangladesh Inland Water Transport Authority announced the suspension of riverine transport services until further notice as the storm reached within 500 kilometres of the coasts.

Cyclone shelter centres have been kept ready in the seven coastal districts as the cyclonic storm ‘Bulbul’ continues to move towards the country’s coastline.

“Adequate measures have been taken to face the cyclonic storm,” State Minister for Disaster Management and Relief Enamur Rahman said at a news briefing at the Secretariat on Friday afternoon.

He, however, there is no possibility of major damage to the crops.

Around 56,000 volunteers are ready to provide help, Enamur said adding that preparations are in place to evacuate people to safe shelters before the cyclone makes landfall.

Khulna, Satkhira, Bagerhat, Barguna, Patuakhali, Pirojpur and Bhola districts are considered most vulnerable to the cyclone. A total of 2,000 packets of dry food have already been supplied to the areas, he said.

The officials and employees under the Water Development Board in these districts have been asked to stay in their workplace so that they can take part in emergency rescue operation in the event of cyclone, the WDB said in a statement.

Accuweather, a US based weather department, reported that Bulbul will near northeast India and southern Bangladesh, threatening the region with damaging wind and flooding rain into the weekend.

Colorado State University Meteorologist Philip Klotzbach told Accuweather, Bulbul is the first storm to be named in the western North Pacific and then travel into the North Indian Ocean and become a named storm again since Wilma in 2013.

AccuWeather Senior Meteorologist Dave Houk said that he expects the flood threat to increase significantly across these areas on Friday night and last into Sunday.

“The outer bands of rain and thunder will spread onshore across northern Odisha, West Bengal and southern Bangladesh on Friday,” said Houk

If the storm continues to track to the northeast and weakens while moving over land, the flood threat on Sunday will be largely confined to southern Bangladesh, it said.

However, there is a chance that Bulbul will slow or stall near the coast this weekend. If that occurs, Houk warns that “the flooding threat will continue along the coast from West Bengal to northern Odisha through Sunday.”

It is very likely to increase gradually and become 150-160 kmph gusting to 175 kmph by tonight over northwest and adjoining west central Bay of Bengal for subsequent 12 hours and decrease gradually thereafter, it said.

Meanwhile, the country’s southwestern coastal districts have taken all-out preparations and kept 1377 cyclone shelters ready as the cyclonic storm may hit the region on Saturday evening.