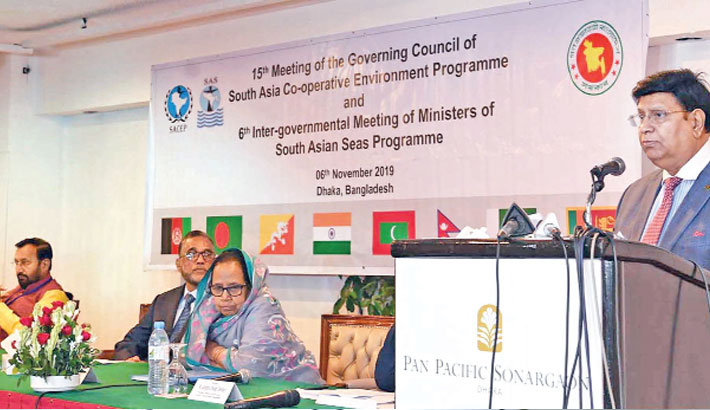 Bangladesh has said that the global leadership, especially South Asian Partners, needs to do more to ensure quick repatriation of Rohingyas to their home in Myanmar.

“It is the responsibility of the global leadership, especially South Asian partners, to do more to ensure quick return of Rohingya people to Myanmar,” said Foreign Minister Dr AK Abdul Momen.

He was addressing the inaugural ceremony of ‘15th Meeting of the Governing Council of the South Asia Co-Operative Environment Programme (SACEP) at a hotel in the capital on Wednesday.

“It is an issue solely between Myanmar and its own people, the Rohingyas. They themselves have to resolve it”, said the foreign minister.

Speaking on the occasion, Dr Momen said that voluntary return of the Rohingyas to their homes in the Rakhine state in safety, security and dignity is the only solution to the crisis.

Narrating the bad impact of Rohingya crisis on Bangladesh, he said that Bangladesh has sheltered 1.1 million forcefully displaced Rohingyas from Myanmar over 6800 acres of forest land in Cox’s Bazar.

“It is in an extremely vulnerable location, their presence affecting our eco-system” said Dr Momen.

About the ecosystem, the foreign minister said that protected and restored ecosystems and the biodiversity can help mitigate climate change and provide increased resilience in the face of mounting human pressures and natural disasters.

He also said that Bangladesh being one of the most vulnerable countries to climate change is also at the forefront of learning how to tackle the adverse impacts of climate change. It has started as early as 2009 a Comprehensive National Act Plan and set its 2 Trust Funds.

The minister also sees a vast area of possible cooperation under the aegis of SACEP.

“Our active collaboration and cooperation will be very crucial for successful implementation of the SDGs as well as the Paris Climate Agreement”, he said.