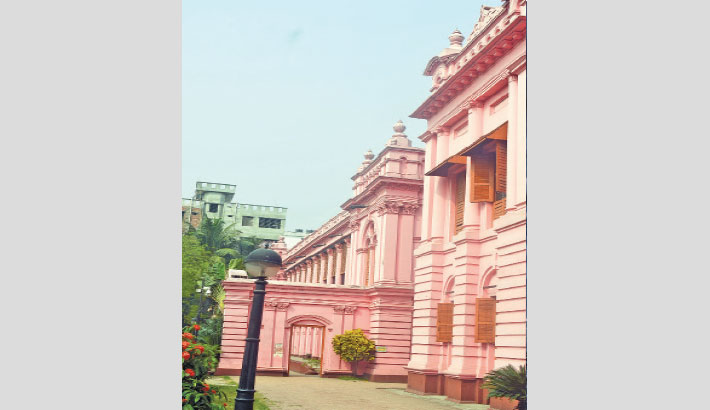 Ahsan Manzil is one of the most attractive historical places in Bangladesh. The building is situated at Kumartoli along the north bank of the Buriganga river in Old Dhaka, Bangladesh. It was the official palace and seat of the Nawab of Dhaka. The construction of Ahsan Manzil was started in 1859 and completed in 1872. It was constructed following the Indo-Saracenic revival architecture.

Historians think that the area was named after the settlers. The surrounding areas such as Tati Bazaar and Shakhari Bazar are still carrying the identity of the occupants. For instance- Islampur was named after Mughal Subadar Islam Khan.

During its construction a high octagonal dome was placed on the central round room. A large drawing room, card room, library, state room and two other guest rooms are located on the east side of the palace. There are attractive wooden stairs in the room that is attached to the north of the domed room. The balusters were ornamented with vine leaves made of iron. The wooden ceiling of the room, decorated with geometric designs, is very elegant. The verandas and rooms are covered with marble. The doorways are placed within semicircular arches. Such a palace is an excellent example of architectural beauty.

(The writer is a student of the Department of Anthropology, Jagannath University.)