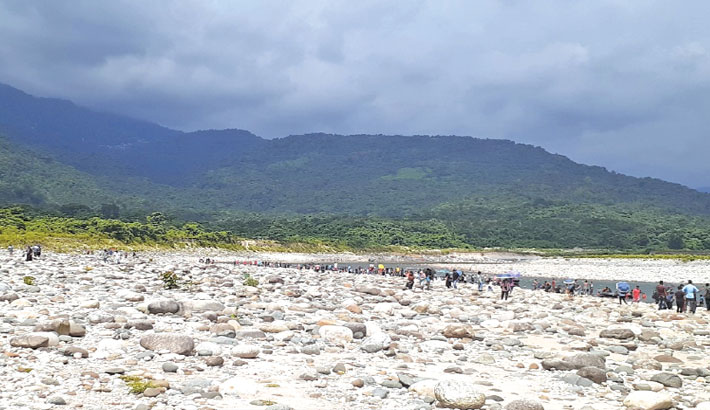 We were mesmerised and delighted after seeing the flowing of lucid water over an ample amount of different sized white stones at the premises of Khashia Jointha hill tracks at Bholagonj. Kompanigonj, in Sylhet district.

Specially, Sylhet region is designated as the daughter of nature and it is also cornucopias with beauty of the environment. There are many natural landmarks like Lalakhal, Bichnakandi, Jaflong, Niladri lake, Madhabkunda & Ham-Ham waterfall, Lawachara National Park, Ratargul Swamp Forest etc. Moreover Tanguar haor, Hakaluki haor and Baikka Beel which are the permanent fish sanctuary as well as paradise of migratory birds of the country.

Bholagonj, a new tourist destination covering with white stone, has recently appeared as a lucrative tourist attraction. It is well known for the largest stone quarry of Bangladesh and that is surrounded by hills, river, and waterfall. This attraction is bounded by Meghalayan (state of India) in north. Dholai River just enters into Bangladesh through the place. Indian boundary is next to this white stone area and the white cloud of Meghalayn State is very near to it. The pebble shore of the Dholai River and its ceaseless streams and transparent chill water are the main attractions that beckons domestic and international tourists. 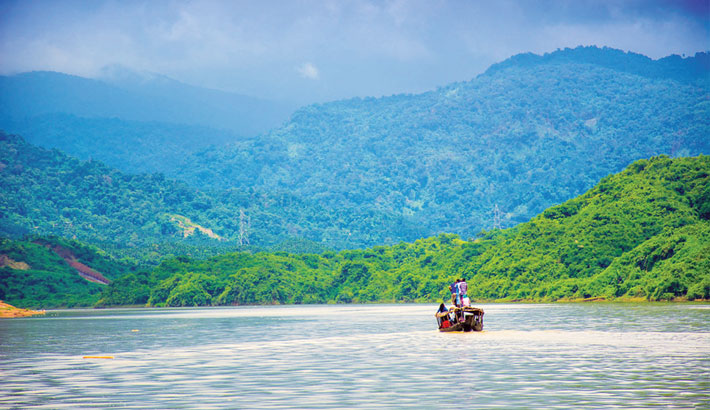 Bholagonj is 33 kilometres away towards Meghalayan hill from Sylhet city; you can reach by local bus, rented CNG, private vehicles and motorbike in one and half an hour. From different sources, it has been informed that the condition of Bholagonj-Sylhet road was extremely dreadful. The road has been under construction since 2017, but after the renovation of the road accomplished a couple of months ago, the communication system is now very good than before, and there is a little impediments to arrive to your destination. Vehicle fare per person by CNG is 130 Taka. You can also hire a CNG by paying some BDT 650 from Amberkhana to Bholagonj. And then after arriving here, you have to reserve an engine boat; not more than eight passengers are allowed on a boat that has been ordered from the Upazila administration, because you have to cross flowing Dholai River by boat where it may take more or less 30 minutes to reach the final destination that means on the white stone shore.

Even though the area is much familiar as stone quarry; in dry season a group of people illegally extract stone from the river basin resulting environmental degradation is being appeared visual, it is eventually turned to tourist spot among the tourists in summer. A handful of visitors of all ages come to closely enjoy the white clouds, ups & downs greenery rocky hill tracks of Meghalaya, diving as well as swimming into crystalline chill water, laydown on the white stone under clear water and the charming and newly highlighted place every day; for instance, in a working day 2500-3000 tourists and in a weekend 8000-10,000 visitors on an average come here as estimated by local businessmen and local community members. When we visited, we were five members, among them Poritoash Paul from Magura and Mosud Ahmed were from Sunamgonj, we hired a boat those are available at Tk 800 taka to reach the isolated beautiful tourist point.

Though we reached safely to the point, it was a risky journey because we did not bring any life jacket on the boat though we went through a river where the current was a little bit dangerous, so any accident could be happened. Moreover, during our visit we had to be more careful in swimming because the current was very strong. It is really difficult for somebody to maintain balance in the middle of the entrance point over a stone in the flowing water. And another crucial issue is that the underwater stones are too sloppy so you need to be more cautious as while walking and swimming. In addition, as the area is situated near the border line between two countries, Bangladesh and India, it is fully prohibited to cross the boundary line that is identifiable with the presence of members of the Border Guards Bangladesh; however we did not notice any tourist police in the territory for ensuring safety and making the tourists aware.

Almost every day, the place is gradually becoming more crowdy as well as popular, but facilities like toilet, changing room before and after swimming that are badly needed especially for female visitors, fresh water from tube well is not sufficient as oppose to presence. Though there is are toilet and changing rooms, accommodation facilities are very much less. So, the authority should pay heed to address the problems. Not only solving this rising difficulties, rescue team should be present there because while going to destination and swimming in the river somebody may fall in danger and sometimes fatal accidents may happen, so if the rescue team immediately appear to help the victim, they can escape dangerous situations.

While traveling to white stone area, it is wise to keep with you some snacks, pure water, extra light clothes or swimming costume, first aid materials, electronic device to capture photos of yourselves & beauty of nature, and other basic necessary things. It has been noticed, some local retailers run small business in the area; they set up temporary stalls where you will get different foods for instance biscuits, cake, banana, tea, fried rice (locally known asakhni), rice & vegetable, water and so on. So, you will be able to have foods according to your taste. Moreover, there is a good arrangement for tube that you can rent by spending TK-100 for swimming.

So overall, without denying any argument, it can be said that spending a little amount of time will relieve your monotony, bring freshness that will fuel your working and study speed. It is a truly amazing feeling to witness the natural scenery that could exist only in our imagination.

The writer is an enthusiastic traveller.