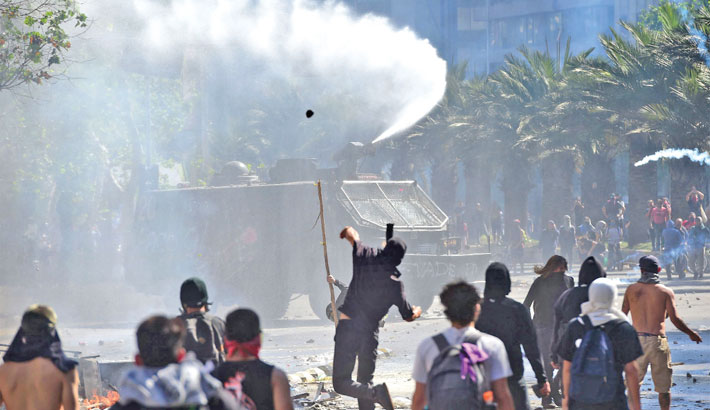 Demonstrators clash with riot police on a fourth straight day when protests against a now suspended hike in metro ticket prices turned violent, in Santiago, on Monday.

SANTIAGO: Chile was under curfew for the third night in a row Monday as violent protests and looting that left 12 people dead raged on into the working week, reports AFP.

Protests originally against a hike in metro fares have turned into anger at the military and President Sebastian Pinera, who on Monday night proposed a “social agreement” to meet the demands of demonstrators.

Army general Javier Iturriaga, charged with security in the capital, said the 8:00 pm to 6:00 am curfew was “necessary” as Santiago and several other cities were once again gripped by violence.

But in several parts of the capital, protesters defiantly ignored the order and faced off with security forces.

Earlier, a young man died after being hit by a military truck during the looting of a fishing company in the southern city of Talcahuano, the prosecutor’s office said Monday.

Pinera said on Sunday the country was “at war” as five people died when a factory in a Santiago suburb was torched by protesters, and two women also died after a supermarket was set ablaze by looters.

Since Chile’s worst outbreak of social unrest in decades began on Friday, almost 1,500 people have been detained.

Once again on Monday, security forces—some 9,500 of which have been deployed—used tear gas and water cannon on the most unruly demonstrators.

Thousands of protesters gathered peacefully in the main Plaza Italia square in the capital on Monday, chanting “Pinera Out!” and “Get out military!”

Art teacher Camila Rojas, 29, said protesters had many demands, but “Pinera’s resignation is the first thing.”