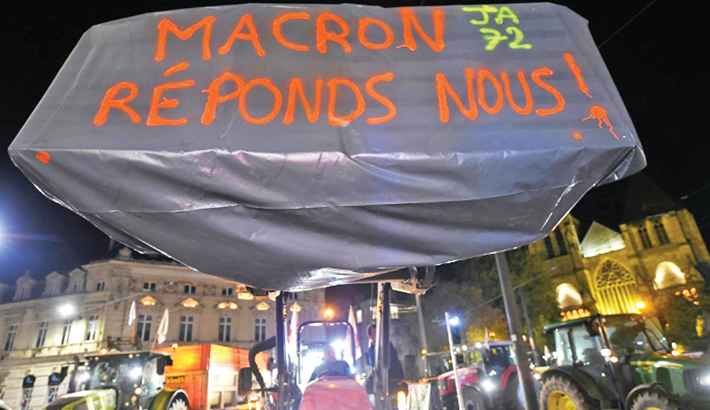 ARIS: Hundreds of farmers rolled out tractors to stage protests at government offices across France on Tuesday, railing against measures they say are crimping revenues and contributing to a spike in suicides in the sector in recent years.

"Macron, answer us!" read a banner in Le Mans, western France, as farmers dumped hay and dug up a roundabout in front of the regional government office as the protests began Monday night, reports AFP.

Another asked "France, do you still want farmers?" referring to regulations, price wars and global trade deals many say are stifling their ability to make a living.

It was the second mass protest this month, after an estimated 10,000 farmers blocked highways across France on October 8.

"We're demanding an end to 'agri-bashing,' to stop making our jobs more and more difficult, to stop putting spokes in our wheels and blaming us for everything," said Delphine Fernandez, president of the Young Farmers association in the southern Gard department.

"Every day a farmer takes his own life, and it seems that Emmanuel Macron's government isn't aware of the problem," she said.

French health authorities confirmed in July that the number of suicides among farmers reached 605 in 2015, the most recent year of data available, after staying stable at around 150 a year from 2007 to 2011.

The subject, long taboo in the sector, has made headlines in recent weeks with the success of the film "Au Nom de la Terre" (In the Name of the Earth), which recounts the true story of a farmer driven to suicide by ever-increasing demands on his operations.

Many farmers say they are being targeted by unreasonable restrictions on the use of pesticides, as well as by vegan activists denouncing the raising of livestock.

"Farmers are deeply angry inside, they keep taking it on the chin, and they need to express their exasperation with the government's inconsistencies," Christiane Lambert, head of the FNSEA farmers' federation, told CNews television.

"We get the feeling that agriculture is caught in a vice, and that no one understands the risk of our lands emptying out because dozens of farms are disappearing," she said.

The government says it is listening to farmers' demands, in particular by passing a food law aimed at giving farmers more pricing control against large retailers who enjoy huge profit margins.

But Agriculture Minister Didier Guillaume acknowledged Tuesday that for many farmers the law has not done enough.