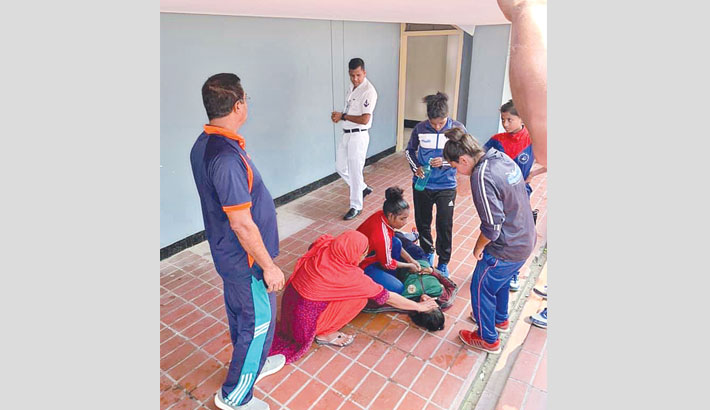 A junior swimmer is seen lying unconscious at ground after alleged cruel punishment by coaches in the capital recently. — SUN PHOTO

Inoki left Dhaka on Sunday night after two Japanese citizens arrived at the national swimming complex to take him for his hometown after he refused to talk with the swimming officials after the incident of the so-called physical abuse.

According to eye witness, Sarifa Akter Mim (14) fainted beside the pool as she failed to take the load but the Japanese coach got upset as he believed it was nothing short of physical abuse.

“It’s true that he was disappointed with the entire episode but there was nothing like physical abuse,” an official of swimming federation told reporters on Monday.

“We tried to convince him that there our local coaches were not insulting him but he was just not ready to listen as he declined to open the door,” he said.

“He was mentally exhausted when he left but we are trying to get in touch with him to see whether he can comeback or not. For the time being we have decided that our national swimmers who will be taking part in the SA Games will be guided by Hamid bhai who will have other local coaches at his disposal,” he said.

Earlier Inoki made a statement through his Facebook post that suggested he was clearly unhappy with the way things are going at the swimming complex.

“The coaches left the female teenage swimmer on hard tiled floor under the sun for about ten minutes. I was watching it from some distance. I suspected that something was very wrong and I told Junior National Team Coaches to go and check her out and make sure that she was all-right. Coaches were laughing and saying that she was acting and we should leave her there. They also told me that it is the Bangladesh style and it is a very usual incident,” he said.

“After I told the coaches to go and help her two coaches went to her and brought the unconscious female swimmer to a shaded area. When they were bringing her back they were trying to throw her into empty deep diving pool. After bringing her into shaded area, I told the coaches to bring ice and call ambulance. They were saying that there is no ice and there is no telephone number to call ambulance service in Dhaka. Finally they took the unconscious female swimmer by National Swimming Team van to somewhere,” he said.

“Due to above incident I informed Bangladesh Swimming Federation my immediate resignation from Bangladesh National Team Head Coach’s position. It was a difficult decision especially considering for the swimmers preparing for South Asian Games in December this year. But I felt it was important for me to show that I really mean ZERO TOLERANCE to organizations or individuals who practice physical abuse or punishments and any harassments,” he said.

“I hope this sad incident would become a critical tuning point into building a new competitive swimming organisation and structure in Bangladesh. It is my responsibility to report the above incident to FINA, as I was Head Swimming Coach of Bangladesh. I would leave further communications with Bangladesh Swimming Federation in FINA’s hands,” he concluded.