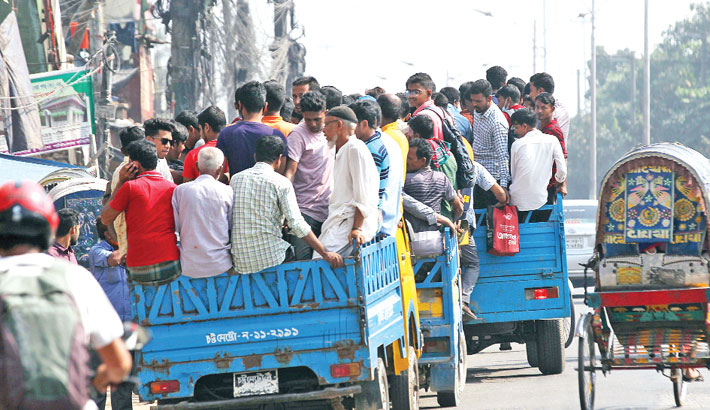 Commuters hire pick-up vans and rickshaws to reach their destinations as bus owners and workers go on wildcat strike in Chattogram on Monday protesting punishment of a bus owner and two workers by a mobile court. —Rabin Chowdhury

CHATTOGRAM: Sudden strike of city service buses protesting the imprisonment to owner and transport workers by magistrate caused immense sufferings to the commuters in the port city on Monday.

The office goers and students of different educational institutions were the worst sufferers of the strike.

Huge number of commuters was seen gathering at bus stoppages and intersections of the city throughout the day.   Metropolitan Transport Owner Group Secretary General Belayet Hossain Belal said they had no decision about the strike from the organisation.

“The magistrate of Bangladesh Road Transport Authority (BRTA) jailed owner, driver and helper of a bus for taking u-turn on Sunday,” he said.

“Being afraid of the incident, the owners and transport workers are not plying the transport on the road,” said Belayet.

However, some other organisations of the transport owners and workers were against the strike.

Deputy Commissioner (DC-Traffic-Bandar) Tareq Ahmed of Chattogram Metropolitan Police (CMP) said they requested the organisation not to keep the vehicles off the road and settle the issue through discussion.

Efforts were going on to address the crisis, he said.

Mentionable, Magistrate Manjurul Hoque of the BRTA jailed a bus owner for 15 days and the driver and helper for one month each for lacking fitness certificate and not completing the set route on Sunday.