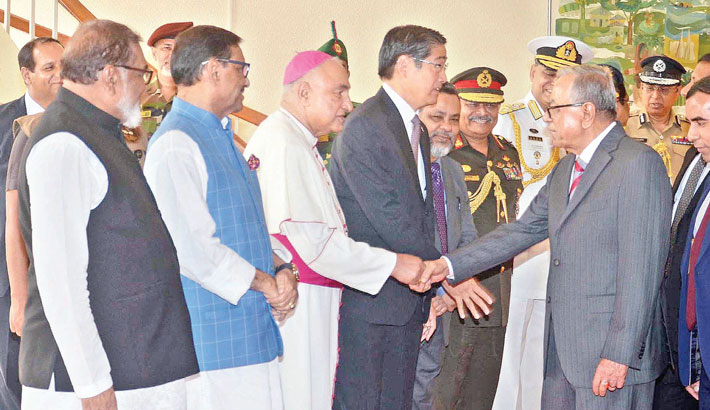 Ministers, diplomats, cabinet secretary, chiefs of three services and home secretary see off President Abdul Hamid at Hazrat Shahjalal International Airport in the capital on Sunday prior of his departure for Japan on an eight-day official visit. - PID PHOTO

The flight, carrying the President and his entourage members, landed at the Changi International Airport here at 7.20 pm (local time).

After over a three-hour stopover in Singapore, the President will leave for Japan by another flight no SQ 636 Singapore Airlines flight at 10.50 pm local time.

Earlier in the afternoon, the head of the state left Dhaka on an eight-day official visit to Japan and Singapore.

A regular flight no. SQ 449 of Singapore Airlines took off from Hazrat Shahjalal (R) International Airport in Dhaka for Singapore as part of his two-nation tour at 1.25pm.

However, the flight is scheduled to reach Haneda International Airport in Tokyo at 6.45 am (local time) tomorrow.

President’s spouse Rashida Khanam, his son Rejwan Ahammad Taufiq, MP, and concerned officials to Bangabhaban and foreign ministry are accompanying him during the tour.

Bangladesh Ambassador to Japan Rabab Fatima will receive the President at the airport.