‘Ministries must work together to fight dengue’ 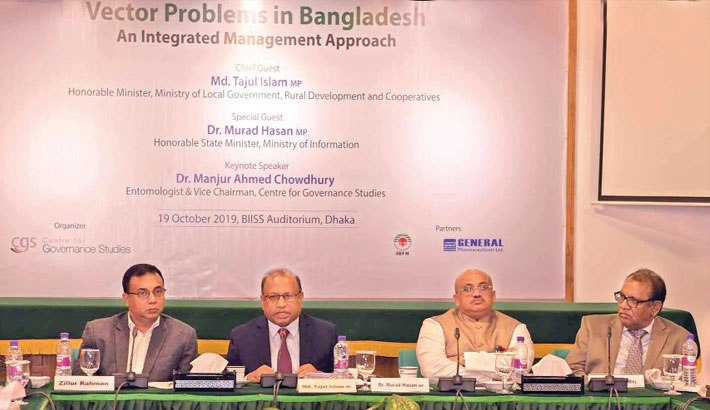 LGRD and Cooperatives Minister Md Tajul Islam speaks at a seminar on 'Vector Problems in Bangladesh: An Integrated Management Approach' at Bangladesh Institute of International and Strategic Studies (BISS) auditorium in the capital on Saturday. - SUN PHOTO

“The government is working relentlessly to tackle the disease ... different ministries need to work together to prevent dengue,” he told a seminar on ‘Vector Problems in Bangladesh: An Integrated Management Approach’.

It was arranged by the Centre for Governance Studies (CGS) at Bangladesh Institute of International and Strategic Studies (BISS) auditorium in Dhaka.

Bangladesh, like some other Southeast Asian countries, was hit by a massive outbreak of dengue this year. A large number of new cases put a severe strain on the country’s overwhelmed medical system.

Since January, 93,361 people were hospitalised with the mosquito-borne disease - most of them in Dhaka. Of them 91,062 made full recovery. The government has so far confirmed 98 dengue-related deaths.

“We’re constantly working to prevent dengue. Initiatives have been taken to create a cell to this end. The local government ministry is working to create this cell,” Tajul said in his speech as the chief guest.

He mentioned that efforts are being made to include dengue in the textbook.

State Minister for Information Dr Murad Hasan said it is important to work through inter-ministry initiatives for preventing dengue and other mosquito-borne diseases.