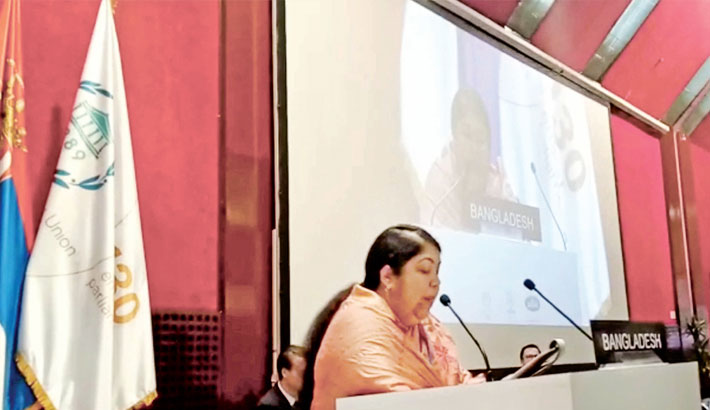 “Women are half of world’s population and they must engage themselves in the mainstream economy to make the development of the inclusive economic growth effective,” she said.

She made the remarks while delivering speech in a session titled ‘Speakers Dialogue on Governance: Economy and Development’ at the 141st I-PU conference in Serbia, said a press release.

“Economic empowerment of women is the reason behind the remarkable progress in socioeconomic index and the 8 percent GDP growth that Bangladesh has witnessed recently,” she said, highlighting the need for bringing the women out of the poverty circle for an overall sustainable development.

The Speaker also said under the prudent leadership of Prime Minister Sheikh Hasina, Bangladesh has transformed into a role model for women empowerment along with the rapid economic growth.

Speakers of other I-PU member countries also spoke at the dialogue session.

Addressing another programme to mark the 130th founding anniversary of I-PU, the Speaker said that the I-PU should be more vocal about protecting the rights of the people.

“Bangladesh became its member in 1972 after its birth under the leadership of Bangabandhu Sheikh Mujibur Rahman. Since then, it has been playing an effective role and as part of its activities, it is now participating in the event,” she said, adding that Bangladesh hosted a successful conference of the 136th edition of the I-PU.

The Speaker also greeted all member states for participating in the event.

Some 1500 delegates, including some 80 speakers and 60 deputy speakers from 140 countries, participated in the event.