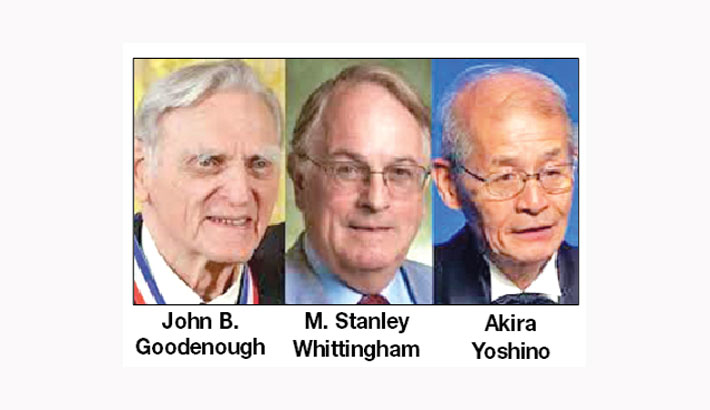 STOCKHOLM: Three researchers won the Nobel Chemistry Prize on Wednesday for the development of lithium-ion batteries, paving the way for smartphones and a fossil fuel-free society, reports AFP.

John Goodenough of the United States—at 97 the oldest person to be awarded a Nobel prize—Britain’s Stanley Whittingham, and Japan’s Akira Yoshino will share the nine million Swedish kronor (about $914,000 or 833,000 euros) prize equally, the Royal Swedish Academy of Sciences said.

“This lightweight, rechargeable and powerful battery is now used in everything from mobile phones to laptops and electric vehicles... (and) can also store significant amounts of energy from solar and wind power, making possible a fossil fuel-free society,” the jury said.

“Lithium batteries have revolutionised our lives since they first entered the market in 1991,” it said, adding they were “of the greatest benefit to humankind”.

Seeking an alternative source of power during the oil crisis of the 1970s, Whittingham discovered a way to harness the potential energy in lithium, a metal so light it floats on water.

He constructed a battery partly made of lithium that utilised the element’s natural tendency to shed electrons, thereby transferring energy.

However the battery was too unstable to be used.

Goodenough built on Whittingham’s prototype, substituting a different metal compound and doubling the potential energy of the battery to four volts.

This paved the way for far more powerful and durable batteries in the future.

The culmination of the trio’s research resulted in the most powerful, lightweight and rechargeable battery ever seen.

When asked what type of researcher he is, Yoshino told a Tokyo press conference that a good scientist needed two qualities.

“One thing is that you have to have a flexible brain. Flexibility. The other is tenacity. You stay persistent and never give up,” he said.

Yoshino, 71, works at the Asahi Kasei Corporation in Tokyo and is a professor at Meijo University in Nagoya, Japan, while Goodenough holds the Cockrell Chair in Engineering at the University of Texas at Austin.

Whittingham, 77, is a professor at the Binghamton University, State University of New York.

The trio will receive the prize from King Carl XVI Gustaf at a formal ceremony in Stockholm on December 10, the anniversary of the 1896 death of scientist Alfred Nobel who created the prizes in his last will and testament.

Last year, the honour went to US scientists Frances Arnold and George Smith and British researcher Gregory Winter for developing enzymes used for greener and safer chemistry and antibody drugs with less side effects.

Arnold was just the fifth woman to clinch chemistry’s most prestigious honour since Marie Curie was honoured in 1911.

This year’s Nobel prize season kicked off on Monday with the Medicine Prize awarded to Americans William Kaelin and Gregg Semenza, and Britain’s Peter Ratcliffe.

They won for research into how human cells sense and adapt to changing oxygen levels, opening up new strategies to fight such diseases as cancer and anaemia.

On Tuesday, the Physics Prize honoured Canadian-American cosmologist James Peebles and Swiss astronomers Michel Mayor and Didier Queloz for research on how the Universe evolved after the Big Bang, and the first discovery of a planet outside our solar system, known as an exoplanet.

The Literature Prize will follow on Thursday, with two laureates to be crowned after a sexual harassment scandal forced the Swedish Academy to postpone the 2018 award, for the first time in 70 years.