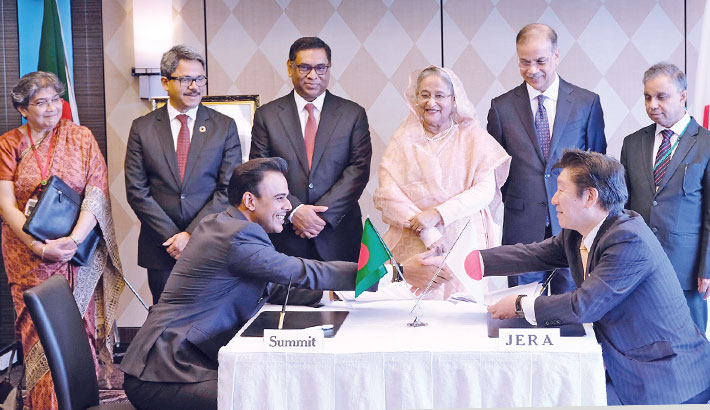 Japan’s JERA has agreed to acquire a 22 percent stake in Summit Power International, a Singapore-based unit of Bangladesh’s Summit Group, for $330 million.

The investment has been finalised within only four months of signing the memorandum of understanding (MoU) between JERA and Summit in Tokyo, in presence of the Prime Minister Sheikh Hasina, State Minister for Power, Energy and Mineral Resources Nasrul Hamid, Principal Coordinator of SDG and Chairman of MIDI (Moheshkhali-Matarbari Integrated Infrastructure Development Initiative) Md Abul Kalam Azad, Ambassador of Bangladesh to Japan Rabab Fatima and Chairman of the Summit Group Muhammed Aziz Khan.

The company is currently constructing power generation facilities with a capacity of approximately 590 megawatts and, with several new projects also being planned, significant growth is expected in the future.

Summit’s Founder Chairman Muhammed Aziz Khan expressed his satisfaction with the investment stating, “Much needed technology and capital for Bangladesh’s fast growing power and energy market will be available from JERA with their vast knowledge and balance sheet. JERA by far could be our best partner. This partnership will support our investment program of US$ 3 billion by 2022 in Bangladesh.”

The new investment was made in accordance with the memorandum of understanding on the development of energy infrastructure projects in Bangladesh that was concluded between JERA and Summit Power in May, JERA said in a statement on Monday.

“Because the demand for electricity in Bangladesh is expected to grow rapidly with steady economic growth, JERA has positioned it as a priority country for investment, participating in a power generation project in Bangladesh for the first time in September of this year,” JERA said.

JERA plans to send executives and employees to Summit Power. As a Summit Power shareholder, JERA will strive to increase the company’s corporate value through the efficient construction and operation of its power generation facilities, thereby contributing to Bangladesh’s sustainable economic growth.

In September, JERA agreed to acquire stakes in a gas-based combined cycle power project in Bangladesh now under development by Reliance Power.

Under the agreement, signed with the India’s Reliance Power, it will acquire 49 percent of the project with combined capacity of 750MW. The project will be set up in Narayanganj’s Meghnaghat, 40km southeast of Dhaka.

The project will be set up within 36 months of signing the agreements.

Summit is the first and largest independent power producer (IPP) in Bangladesh with a generating capacity of 1,941 MW, a 583 MW under construction and more than 3,000 MW in the pipeline. Summit also owns and operates a Floating Storage and Regasification Unit (FSRU) vessel and supplies 500 million cubic feet per day (mmcfd) of re-gasified gas to Bangladesh. Summit had earlier received equity investment in FSRU project from Mitsubishi Corporation and for power project from Taiyo Life Insurance Co of Japan.