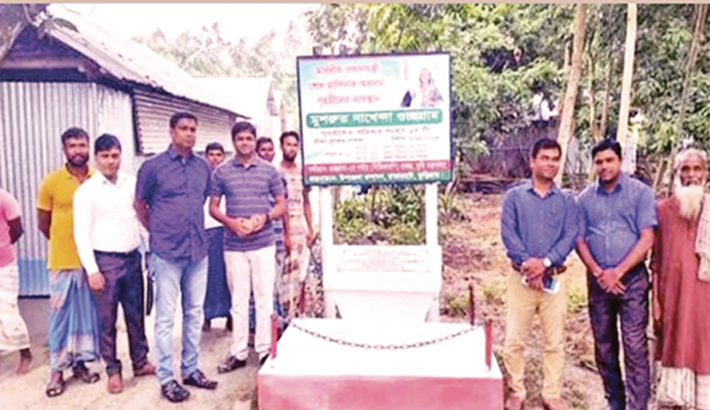 The families were rehabilitated under the second phase of the Guchchhogram (Cluster Village) project, one of the prime projects under Ministry of Land to ensure inclusive development of all citizens to achieve the sustainable development goals (SDGs).

“Under the program, 15 houses have been constructed on 54 decimals of land spending Tk. 23-lakh and 50 thousand at Mushrrut Nakhenda village in Ghorialdanga union of Rajarhat Upazila in Kurigram district,” he said.

Every house built under the project has separate sanitary latrine and tube well and other facilities. “Each of the 15 homeless and destitute families has been provided with one house for living in the Mushrrut Nakhenda Guchchhogram (Cluster Village) project,” the UNO said.

Members of the 15 distressed families are now living in their respective new houses with smiling faces after receiving allotment of the houses. They are very happy to have the houses.

Talking to the agency, Rehabilitated Nur Jamal Haque there said he had no place to put his two feet on the ground and no place for sleeping.

“I had to lead floating life with my family members on the lands of other people depending on their mercy here and there for many years without any certainty for living and livelihoods,” Haque said.

He said the land owners frequently ordered to leave their places when he found only darkness as he had no other alternative to go to other places with his older father, mother, wife and children.

“I was at a loss while shifting from one place to another for at least seven times over the past twelve years before the UNO allotted the newly built house to me at the Mushrrut Nakhenda Guchchhogram project this year,” Haque said.

“I have no worries now. Members of my family have shelter. We are earning better livelihoods and leading happier life’” he said thanking Prime Minister Sheikh Hasina for her kind thoughts for distressed people.

Like the other rehabilitated homeless families at the Mushrrut Nakhenda Guchchhogram project, Rahima Begum said told the national news agency that she did no land, house or properties.

“Before rehabilitation at the Guchchhogram project, I had to lead miserable life with my three children on the lands others. Now I have got a house allotted to me and my two sons and one daughter are very happy,” Rahima said.

While visiting the Mushrrut Nakhenda Guchchhogram project recently, Regional Project Director of the CVRP project SM Abu Huraira told reporters that quality of constructions of the houses in the project are very good.

“With the rehabilitation of 15 homeless and floating families, the Mushrrut Nakhenda Guchchhogram project has factually turned into a model project where the rehabilitated people are leading happier life now,” he said.

The rehabilitated people with their family members are very happy to have their own houses and they are engaged with various income generating activities to lead better life.