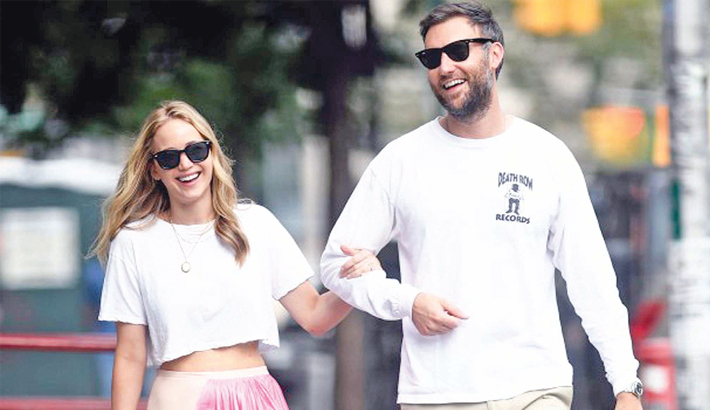 It was in February 2019, when Oscar-winning actress Jennifer Lawrence confirmed to the world that she was engaged to her boyfriend, Cooke Maroney. For the uninitiated, Cooke is an art director at the Gladstone Gallery and the couple speculatively started dating from June 2018. In May 2019, Jennifer and Cooke hosted a small and very intimate engagement party at a New York apartment. The pair have mostly kept their relationship very low-key, albeit, Cooke was Lawrence's plus one at The Favourite's (2018) NYC premiere.

According to Page Six, Jennifer and Cooke may already be man and wife. The couple was spotted exiting the Manhattan Marriage Bureau, with Lawrence holding very official-looking documents. They were joined by two bodyguards, a photographer and a close friend. While Maroney was seen hiding his ring finger on the left hand, he kept his look casual cool in a white sweatshirt and blue jeans. On the other hand, Jennifer looked like a beaming bride in a grey blazer, blue jeans and black reflective sunglasses with minimal makeup.

An eyewitness, who was present inside the Manhattan Marriage Bureau, to get their own marriage license, had tweeted, "When you go get your marriage license and Jennifer Lawrence walks by to tie the knot before your eyes. Yeah, kids, City Hall is COOL. The place to go!" However, the tweet has officially been deleted.

If the reports are indeed true, huge congratulations to Jennifer Lawrence and Cooke Maroney!