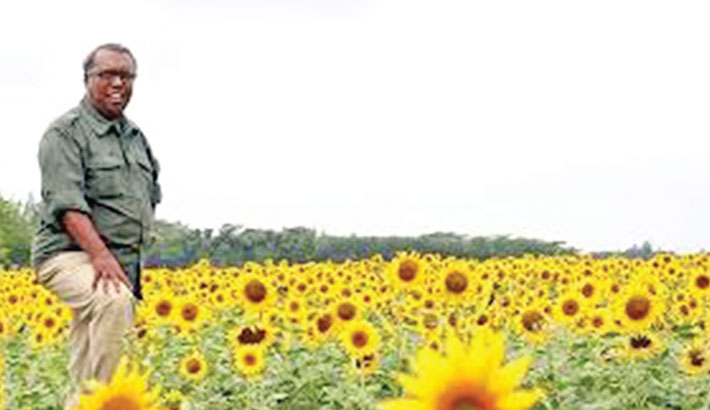 Shykh Seraj is a name today in Bangladesh, not for his attachment with the media only but also for his contribution towards economically emancipating the ‘have- not’s who die unknown, unwept and unsung even un-kissed.  They are like those who are born only to blush unseen. It was per-chance I could meet Shykh Seraj in Kushtia long 20 years back when he visited Lalon Academy and Shelaidah Kuttthibari of Rabindranath. I was associated with Lalon and Rabindranath as a researcher and founded Lalon Academy in 1963 when I was a teacher in the department of English, Kushtia College. I also founded Folklore Research Institute in Kushtia in 1970. I wanted to explore the gems which the rural folk have with them for generation in the form of proverbs, riddles, stories and songs.  These are full of knowledge which we call ‘folklore. ’  ‘Thakur Maar Jhuli’ a Grand Mother’s container made from cloth and that contains folk tales full of fun but are full of wisdom  is one that we group as ‘folklore.’

Tagore was concerned with the farmers and the peasants. I worked on Tagore’s rural development programme and published a number of books also. I never met him earlier but I knew him as a very smart media personality who had already left his mark among the cross section of people in Bangladesh for his commitment and dedication. Shykh Seraj caught my attention as I found him deeply involved with the life of the farmers when he visited the farm field in the meadows and deep meadows. Farmers looked very shaky but he encouraged them to talk before the television. The programme ‘Hridoi -e- Bangladesh, Mati -o-Manush’ was about these unfortunate who wo5rked day and night to feed the teeming millions of lives in Bangladesh.  At once I thought of Rabindranath who looked for a poet who was a part and parcel of farmer’s life and shares their moments of pain and pleasure.

One who takes part in farmer’s life and is true to his words and deeds. And one who is very nearer to the soil, I look forward to seeing and listening to that visionary poet’s message, the world never heard of, with heart and soul. And now I believe, had Rabindranath been living today, he would have definitely taken Shykh Seraj to the heart of his heart.

Mr. Shykh Seraj is a development activist who already brought about a silent revolution in the agricultural sector. He is best known as the maker of farmers’ budget, a unique event never thought of before. It was innovative and very much challenging.  He was a participant observer who lived with the poor farmers and shared their experience and tried to explore means to find ways for their better living condition. These farmer work day long but at the end they look helpless for their food and good lodging. They have no savings. The Farmers Budget is a big land mark for them and they should also go for savings.      Shykh Seraj has already been on the attention globally and also nationally.

I dedicated one of my books on Tagore’s Cooperative movement.   In fact Tagore brought about a change in rural development through cooperation of farmers.  Once Tagore said about villages in Bangladesh:

villages are like women. In their keeping is the cradle of the race. They are nearer to nature than towns, and are therefore in closer touch with the fountain of life. They have the atmosphere which possesses a natural power of healing. It is the function of the village, like that of woman, to provide people with their elemental needs, with food and joy, with the simple poetry of life, and with those ceremonies of beauty which the village spontaneously produces and in which she finds delight. But when constant strain is put upon her through the extortionate claim of ambition; when her resources are exploited through the excessive stimulus of temptation, then she becomes poor in life and her mind becomes dull and uncreative. From her time-honoured position of the wedded partner of the city she is degraded to that of maidservant, while, in its turn, the city, in, its intense egotism and pride remains unconscious of the devastation it constantly works upon the very source of its life and health and joy. .....................

Such a moral perversion has reached its extreme length to-day in the relationship of the city and the village. The city, which is the professional aspect of society, has gradually come to believe that the village is its legitimate field for exploitation, that the village must at the cost of its own life maintain the city in all its brilliance of luxuries and excesses; that its wealth must be magnified even though that should involve the bankruptcy of happiness.

True happiness is not at all expensive, because it depends upon that natural spring of beauty and life which is harmony of relationship. Ambition pursues its path of self –seeking by breaking this bond of harmony, cutting gaps, creating dissensions. It feels no hesitations in trampling underfoot the harvest field, which is for all, in order to snatch away in haste the object of its craving. To-day this ambition, wasteful and therefore disruptive of social life, has usurped the helm of society.

I understand Shykh Seraj also thought in the same way as did Rabindranath when he visited Bangladesh village in his young age as the Zamindar. Shykh Seraj is only among millions who had volunteered for the betterment of the farmers who provide us the food and succor at the cost of their untold suffering. In most cases till these days many of them could not make both ends meet.  In my long years of life I have not seen anybody going into so deep a problem of the farmers for their survival as a man.

These farmers suffer because they are not in a position to fight for their problems. There is a leadership crisis in them. They should be allowed to voice their grievances to the authorities concerned without fear. The society must treat them as a man who is an integral part of the country. Bangabandhu wanted to bridge the gap between the rich and poor. He changed the nomenclature of his party involving farmers and workers like socialist countries. Shykh Seraj almost has been following Bangabandhu not politically but he is imbued with his vision and mission for changing the attitude of the society towards people. They need respect from the society. They need to be trained with the modern method of agriculture. They are very often cheated by the educated touts. Farmers though are non literate; they are not without wisdom or folk knowledge. They have many things which we call indigenous or folkloric knowledge and if these are used properly the fate of Bangladesh could be changed. Things would have been different had we been able to use their knowledge for their upliftment. Shykh Seraj actually had been doing these things using their folk knowledge for the change.  We have scholars and experts. They talk of things which they have learnt from the west and these have no connection with their own environment. Rabindranath once went for potato cultivation at Shelaidah in Kushtia with the help of the agricultural experts. There was one tribal farmer. He also went for potato cultivation using his folkloric method. The result, the tribal farmer made a good harvest while Rabindranath suffered a huge loss. Shykh Seraj has been making an all out effort to help the farmer with available local means. I followed him closely as he moved with his mission to provide the farmers with necessary guidance talking to them at the field level. But farmers could not follow these because they could not watch any television. Had there been ‘Chashi Clubs’ or farmers club in villages, it would have gone a long way to help them. The local Agricultural department and  Bangladesh Rural Development Board in collaboration with Shykh Seraj can set up Chashi Club in respective areas, tens of thousands farmers could get the benefit of the programme.

Shykh Seraj has been successful in promoting the farmers’ cause through media. In a word, he has become the ‘Farmers’ voice.’

We appreciate that the government have also taken efforts to change the farmers’ life with a programme, Ekti Bari Ekti Khamar. But this programme should be more organised. The farmers should organise themselves to use their own natural resource than the financial assistance. Cooperative method is the only way that can change their fate. Presently middle income group migrate from village to town. The poor people too are migrating from the village. This happens because there is a lack of amenities in the village. Most of the villages have no water during the dry season as the rivers, canals and ditches are without water. Again, during the wet season, the rivers, canals all are full of water. People suffer from water logging.

On the birthday of Shykh Seraj  as we pray for his long life, we want he should be given more scope not only to educate the farmers, our youths in the university, college and school should be trained accordingly as they get back to their village community after completing their education