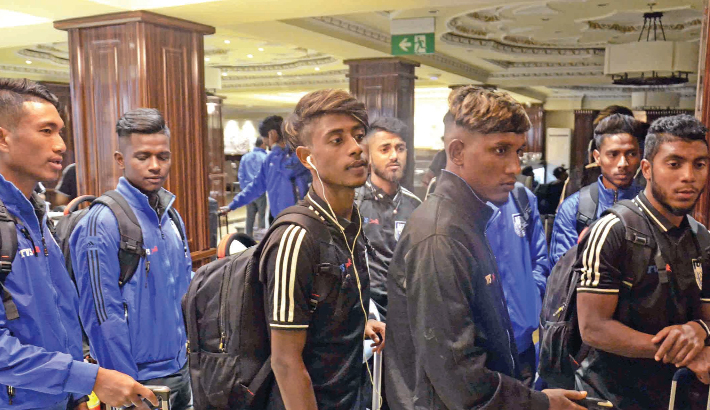 Players of Bangladesh National Football Team are seen after reaching safely at Dushanbe in Tajikistan on Sunday’s night. – BFF Photo

Bangladesh National Football Team will play their first practice match against Tajikistan’s local Club FC Kuktosh in the first practice match as a part of preparation of their FIFA World Cup Qatar 2022 joint qualification round-2 against Afghanistan scheduled to be held today at Hisar Stadium in Dushanbe.

The second and last practice match will be held on September 5 at the same venue.

The national booters are now in Dushanbe for a ten-day intensive training under the supervision of team’s head coach James Day ahead of the away match against Afghanistan scheduled to be held on September 10.

Earlier, Bangladesh Football Federation (BFF) on Saturday announced a 32-member final squad of the national football team, comprising 23 booters and nine officials, for their away match against Afghanistan.

Bangladesh have been put in the Group E along with Qatar, Oman, neighbouring India and Afghanistan.