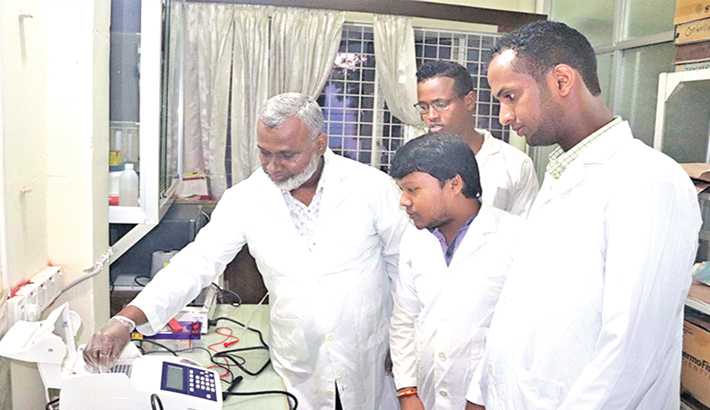 MYMENSINGH: The Bangladesh Agricultural University (BAU) researcher Prof Dr Md Siddiqur Rahman of Medicine Department claimed the invention of vaccine of brucellosis diseases in cattle for the first time in the country after one and a half years of research.

Brucellosis disease was first introduced in cattle in Bangladesh in 1967. This disease causes the animal to miscarriage at the end of pregnancy, infertility and weak reproductive system of animals. It also causes death of animal due to uterine inflammation. The disease transmits from animal to human in contact with infected animals. Brucellosis disease has a profound impact on the economy of the country by damaging livestock.

Dr Siddiqur said, we identified the Brucella Biover-3 in cattle and developed a heat killed vaccine from there to prevent Brucellosis in Bangladesh. In the course of the study, we collected many samples from dead babies and fetuses of infested cattle.

Later, we isolated germs following specific scientific methods from these samples through culture. Then the germs are void through a certain amount of heat at certain period so that it loses the ability to cause disease in the organism. In order to observe its effectiveness as a vaccine, non-essential germs are injected into the body of the guinea pigs. Up to nine weeks the results are recorded. It is seen from the second week that the vaccine began to build immunity. This creates maximum immunity in the fourth week.

He claimed, research activities are underway to make the vaccine more effective and standardized. If the vaccine is able to build the immune system as expected, it will be possible to market it within the next three years.