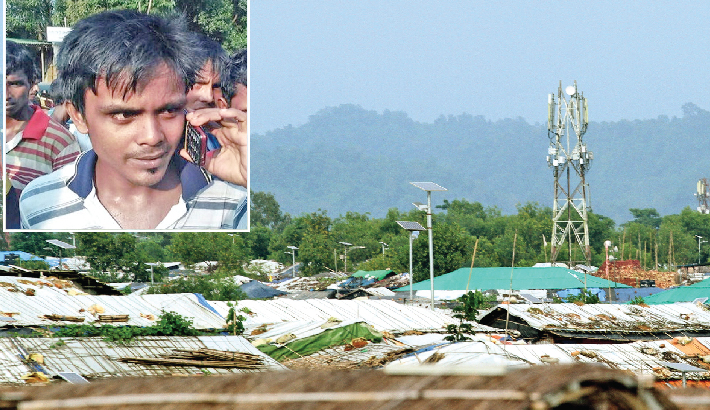 Three mobile phone operators have built Base Transceiver Stations (BTS) towers at Balukhali Rohingya camp in Cox’s Bazar district. Rohingya people have been using mobile phone since their influx in the country, though using cell phone is banned in the camps. (Inset) A Rohingya man is talking over cell phone. — star mail

The government has decided to ban mobile phones at Rohingya camps within a week to control law and order in vast span of shelters following the mass rally of displaced Myanmarese citizens raising security concerns.

The ministry of posts and telecommunications has instructed the Bangladesh Telecommunication Regulatory Commission and it has conveyed the order to all the cell-phone operators Monday.

“Despite restriction to stop SIM sales to the Rohingyas since when the the influx of the Myanmar citizens but it was ignored,” a ministry statement said.

The operators have been ordered to snap mobile connectivity and sale of SIMs to the Rohingyas within a week, it said.

On Monday’s cabinet meeting the use cell phones in the camps was discussed.

According to sources, the government concern intensified after mass gathering of the Rohingya last week using cell phones and criminal activities of the sheltered group.

Brig Gen SM Farhad (Retd), Secretary General of Association of Mobile Telecom Operators (AMTOB), said, “Mobile operators are always committed to ensuring compliance practices following the directives of BTRC.” They will take appropriate measures regarding the issue. It is also necessary to mention that SIMs can only be activated after the bio-metric confirmation from the NID database, he said.

About the SIM cards sales and distribution in Rohingya camps, Shahed Alam, Chief Corporate and Regulatory Officer, Robi Axiata Ltd, said, “We would like to categorically state that it is not possible for anyone to avail a new SIM connection without proper biometric verification of an individual’s identity with the NID database.

“In this context, we believe that the solution to this problem lies in the proper registration of SIM cards following NID database,” he also said.