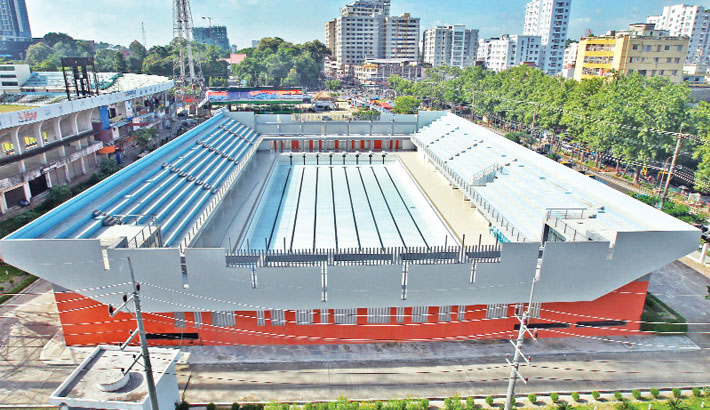 The much-awaited ‘Chattogram Jila Krira Sangstha Swimming Complex’ will be opened to the swimmers and learners in the port city next month.

The first-ever modern swimming pool in the city was constructed at Outer Stadium in Kazir Dewri area at a cost of Tk 11.62 core.

Though construction of the pool was completed earlier and it was supposed to be opened in November last year, but it was delayed due to some complexities, said sources.

National Sports Council (NSC) constructed the pool. Works of the pool was started in February 2017 and completed in November last year. Then, the NSC handed over it to Chattogram Jila Krira Sangstha (CJKS) to run and maintain, they said.

CJKS Executive Committee Treasurer Shahabuddin Md Jahangir told the daily sun that it will be the latest swimming pool having all the modern facilities following international standard in the country.

Swimming contests along with training and regular swimming practice will be held there regularly, he said.

Sources said the pool was developed on over one acre of land as an international standard swimming complex having 1,100 square-metre pool with 50-metre length and 22-metre width.

The pool with a capacity of containing 20 lakh litres water is of two-metre depth on average and has eight tracks. The galleries also have a capacity for around 1,500 viewers.

The complex also houses official rooms, change rooms, shower room, rest rooms, locker services and toilet in the west side of the pool.

CJKS Swimming Committee Vice chairman and former Swimmer Mahbubur Rahman Sagor said people having affection to swim welcomed this initiative and they are eagerly waiting for it.

“It’s a good initiative for the city dwellers and will surely help introduce the local swimmers with national and international arena of swimming,” he said.

The swimming pool is well-equipped with modern facilities and it needs a little more to have absolute standard of international one, said Sagor.

CJKS took extra ten months to open the pool for assigning employees and forming policies to operate it, he added.

Swimming Committee of the CJKS are now busy with last moment works to open the pool in September and have already assigned three swimming coaches including a female one to teach and run swimming activities.

Sources said swimming activities and training will be run in eleven different shifts everyday from 7:00am to 8:00pm while every single session will be of an hour.

In morning session, there will be five shifts for male and female from 10:00am to 12:00 pm and two shifts will remain reserved for female from 1:00pm to 3:00pm in noon session.

In the afternoon session, there will have three shifts for male from 4:00pm to 7:00pm and last session of an hour will be kept for swimmers, they said.

The intended swimmers have been divided into four categories and separate charges were set for them.

The CJKS will also rent the swimming pool for shooting of movies and dramas at a charge of Tk 10,000 for every two hours.

Chattogram Divisional Krira Sangstha Vice President and Chattogram Press Club President Ali Abbas said that the swimming complex is a good initiative as there was no pool adjacent to the stadium in port city.

He also requested the CJKS to take care of other events of sports at the Outer Stadium.

“Swimming is also a game, so the pool was needed. But, CJKS will have to ensure outdoor game activities besides swimming at Outer Stadium. Now, most of the areas of the Outer Stadium are unprotected,” he said.

In this regard, CJKS Swimming Committee Vice Chairman Aslam Morshed said City Mayor AJM Nasir Uddin planned for beautification, sports and other activities at the rest part of the Outer Stadium.

Mentionable, there was no standard swimming pool for contests and learners in the city.

There are some swimming pools for elite classes in residential hotels and clubs where mass people have no access.

On the other hand, most of the ponds of the city are not suitable for learning swimming since they remain dirty under the capture of illegal occupants.

So, CJKS Swimming Complex could be a solution in this regard, concerned people observed.