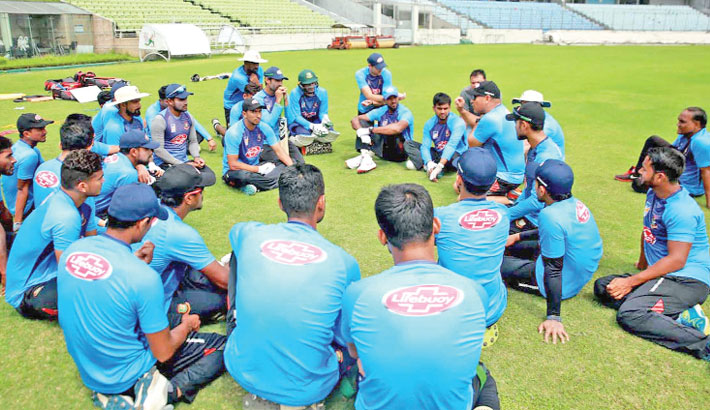 Bangladesh National Cricket Team Test and T20I skipper Shakib Al Hasan keenly listens to the briefing of Tigers head coach Russell Domingo while resting with his pads on at Sher-e-Bangla National Cricket Stadium in the capital on Saturday. — BCB PHOTO

Shakib, who had a remarkable ICC World Cup 2019, earlier skipped the three-match ODI series against Sri Lanka, returned back to Dhaka from USA hours before joining the national nets, where skill training take the center-stage after conditioning camp in the opening week.

Shakib was in exceptional form in the World Cup as he ended with 606 runs at an average of 86.57 and also picked up 11 wickets. He struck two centuries and five half-centuries but admitted he was exhausted in the last two games Bangladesh played against India and Pakistan.

But after the tournament he stated that he was mentally and physically fatigued and wanted to skip the tour of Sri Lanka and in the meantime complete his Hajj.

The arrival of Shakib can surely be some sort of relief for the newly appointed head coach Russell Domingo who took over the control from the strength and conditioning trainer Mario Villavarayan.

The opening day of the skill training camp began at the Sher-e-Bangal National Cricket Stadium (SBNCS) with Russell taking his charges to the drawing board to discuss his plan of action while Shakib approving it as the team leader before going into the nets to have some batting session at the center wicket of SBNCS.

Shakib batted for quite some time in the nets before he decided to go into the dressing room to relax considering he was having kind of a jet lag due to his long flight.

Others were seen doing fielding session under the guidance of Ryan Cook as he also joined the preparation camp for the first time since it started weeks earlier with some of the batsmen getting some time at the center wicket.

After the skill camp was over BCB cricket operation chairman Akram Khan had a meeting with the coaches and national selectors along with Shakib.

“Shakib is very tired. He landed (from USA) at three during night and came to practice session today, this is a big thing. The captain is positive,” Akram told reporters after the meeting.

“Lots of new staff have joined since ICC World Cup 2019. Because we have a series from the beginning of next month, selectors, captain, coach we all had a meeting on it. How to improve the strength of our team or how the policy should be. It was a good discussion. And it will continue. Sumon (Habibul Bashar) came after many days to make it clear how the selectors will do their work,” he said.

“Our main point was, how we can improve Bangladesh cricket, both at home and away. Our concern earlier was about home matches before but now we have to think about matches in foreign soil too. And for that, what is necessary, what will be the role of the selectors, what is the demand of the captains, how can we help them- we discussed about all of these things,” he said.

“Honestly, we have some lackings, that we may not feel when we play at home but when we play outside, we feel how important those are. That’s why we decided that we should have same strength both at home and away.  We should play well at matches at foreign soil like the home ones,” he added.

Akram said that he is impressed with the new head coach Domingo after seeing his planning and emphasised on the importance of developing pace bowlers considering now the wicket is prepared that can encourage the fast bowlers.

“Domingo has a very good planning. He is good a professional coach. He has good vision for a long period of time. I have seen many coaches since my early days as player to now, he is different and has a better planning. If we can and our board can help him, our standard of cricket will improve,” said Akram.

“We are thinking about home and away both. Who are performing well at home and perform better in away. He is thinking deeply about these matters and I like this idea a lot. And he is also listening to the selectors and we discussed about the selectors’ role,” he said adding that time is high to develop fast bowlers.

“We have developed our wicket in past two years. It was a difficult job. Now, the number of local fast bowler is improving. We also trying to make the wickets better so that we can play well in away matches, he said.

The opening day of the practice camp went well apart from a minor injury faced by all-rounder Mehedi Hasan Miraz who was seen leaving the ground after sustaining the blow on his right hand while fielding.  Later, BCB disclosed that the injury was not of a serious nature.