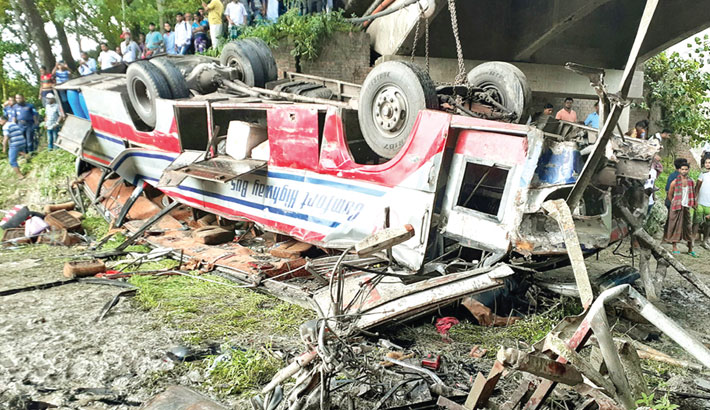 A bus lies mangled after it fell into a ditch breaking the railing of a bridge at Dhuldi on Dhaka-Khulna highway in Sadar upazila of Faridpur on Saturday. The accident left at least eight people dead and 25 others injured. —STAR MAIL

A passenger bus plunged into a roadside ditch Sunday in Dhuldi area of Sadar upazila in Faridpur district, leaving at least eight people dead and 25 others injured on Sunday.

The Gopalganj-bound bus hit the railing of Dhuldi Bridge on Dhaka-Faridpur highway and plunged into the ditch leaving the passengers dead on the spot.

The accident took place while the bus gave way to a motorcycle as it tried to overtake.

The motorcycle also plunged into the ditch killing its rider on the spot.    The bus of Comfort Highway Company met with the accident at around 2:00pm, the fire service official said.

Later, two others succumbed to their injuries at Faridpur Medical College Hospital.

The number of fatalities may rise, he added.

Meanwhile, a man was killed and nine others were hurt in another road accident in Thakurgaon district on Saturday. The deceased was identified as Yusuf Ali, 45. He was working as assistant to the driver of Taj Paribahan bus service. The injured were rushed to Thakurgaon Sadar Hospital where they were being treated.