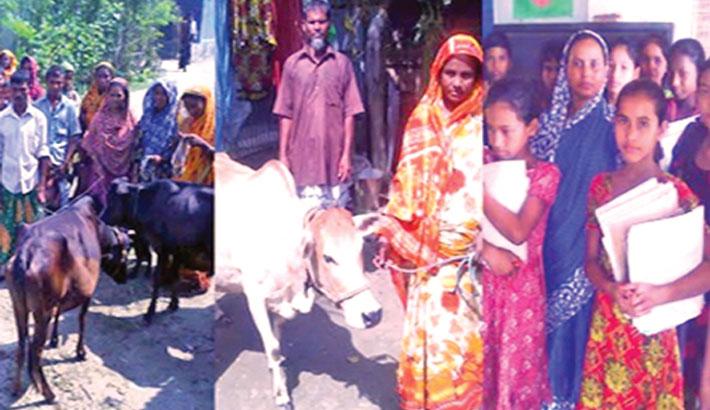 RANGPUR: Some 130 homeless families rehabilitated at Purbo Kochua-1 and Purbo Kochua-2 Asrayan Prokalpo have won poverty through income generating activities (IGAs) in Nohali union of Gangachara upazila in the district.

Talking to the agency, members of rehabilitated families at these two adjoining Asrayan Prokalpo narrated their stories of untold miseries and transformation toward prosperity by overcoming economic vulnerability over the years, reports BSS.

At Purbo Kochua-1 Asrayan Prokalpa, 90 river-eroded families are living in nine barracks after rehabilitation there and earning well through IGAs with supports under the government’s comprehensive social safety-net programmes.

After rehabilitation, local government departments provided necessary training on IGAs and other essential issues and Gangachara Upazila Cooperative Office provided first Taka 6,000 as interest-free microcredit loan to each of the rehabilitated families.

On payment of the first loan, most of the beneficiaries subsequently got Taka 10,000, Taka 15,000 and Taka 20,000 to raise capitals and expand IGAs for becoming self-reliant to contribute their own in achieving the sustainable development goals (SDGs).

Like others, rehabilitated couple Nazrul and Bulbuli living there discussed miserable days they passed since becoming homeless following river erosion with their three children.

“After getting training and revolving microcredit in phases, we are making good profits to raise capital through small- scale business, animal husbandry, poultry, tree plantation, vegetables and fruit farming at homesteads,” said Bulbuli.

Couple Alef Mian and Feroza rehabilitated there remembered hard days they passed with their two children since becoming floating people in a nearby village 18 years back.

“When there was only darkness in our life, we got a shelter at Purbo Kochua-1 Asrayan Prakalpa in 1997 to begin life anew as the then government of Prime Minster Sheikh Hasina completed its construction during her 1996-2001 tenure,” Feroza said.

After getting training on IGAs and subsequently Taka 6,000 microcredit from Gangachara Upazila Cooperatives Office as interest-free loan, the family purchased a van-cart to earn for livelihoods.

The couple purchased three heifers, opened a grocery shop and started cultivating 54 decimals land as sharecropper to get three crops annually and purchased two decimals land to earn well and has become self-reliant.

“We have cattle heads, television, furniture, clothes and other properties worth Taka eight lakh,” a smiling Feroza said thanking Prime Minister Sheikh Hasina for taking the initiative that brought ray of hope anew in their life.

Couple Rashidul and Sabina rehabilitated there said they first got Taka 10,000 loan, opened a grocery shop and later, Taka 15,000 and again Taka 20,000 to increase investment in business.

“Now, we are earning well to lead happier life with our only son and parents,” Sabina said adding that they have assets like grocery shop, a refrigerator, television and furniture worth Taka four lakh.

Similarly, couple Anwar and Shahzadi at Purbo Kochua-2 Asrayan Prokalpo narrated their stories of miseries and successes they achieved after rehabilitation there to lead solvent life with three school-going children.