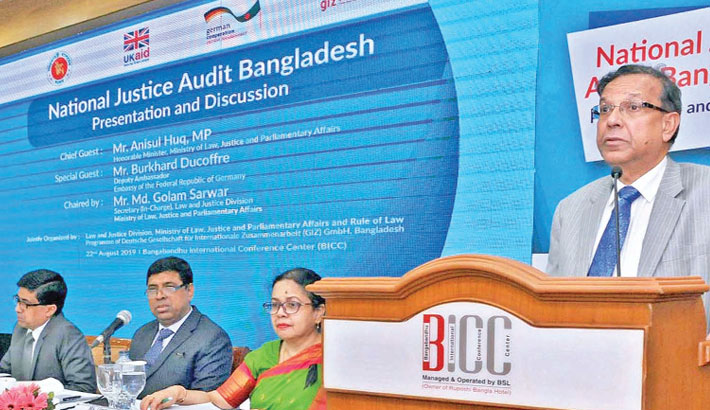 Law Minister Anisul Huq on Thursday urged the judges to reduce the backlog of the cases pending in courts across the country for ensuring justice.

Around 32 lakh cases are pending in court across the country. The number is unusual, said the minister.

The minister said this while speaking at a program titled “National Justice Audit Bangladesh: Presentation and Discussion” held at Bangabandhu International Conference Center (BICC) in the capital.

According to justice audit data, 87 percent people have confidence in judiciary department in the country. If 32 lakh pending cases doubles in ten years, the confidence of people will decrease to 37 percent, the minister said.

The necessary steps will have to be taken to reduce the backlog of the cases. The suggestions of skilled judges and justice audit data can play good role in this regard, he suggested.

He also pointed out different initiatives of the government including amendment of existing law to reduce backlog of the cases.

The process is underway to amend the drug related law to remove obstacles in disposal of the cases, he said.

All district judges and their equivalents judges, chief judicial magistrates and metropolitan magistrates from across the country attended the program.