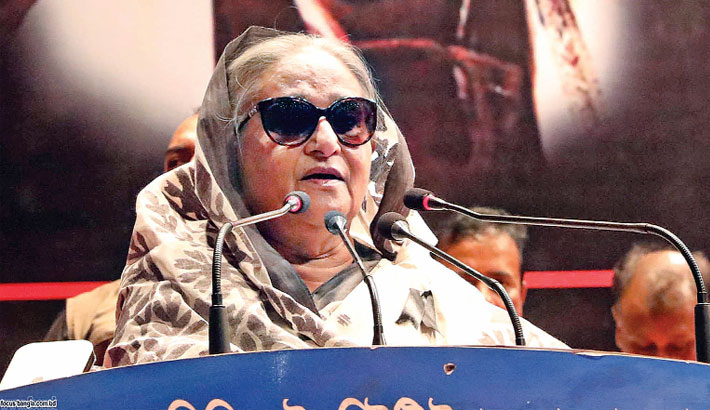 “Khaleda Zia was not accused in the 21 August grenade attack case. Being a prime minister, she can in no way avert the responsibility. Moreover, she was in charge of the home ministry while Lutfozzaman Babar was the state minister,” Sheikh Hasina told a discussion programme at Krishibid Institution in the capital.

Sheikh Hasina, also president of the ruling Awami League, said the horrendous incident was staged through the direct patronisation of the BNP-Jamaat government. 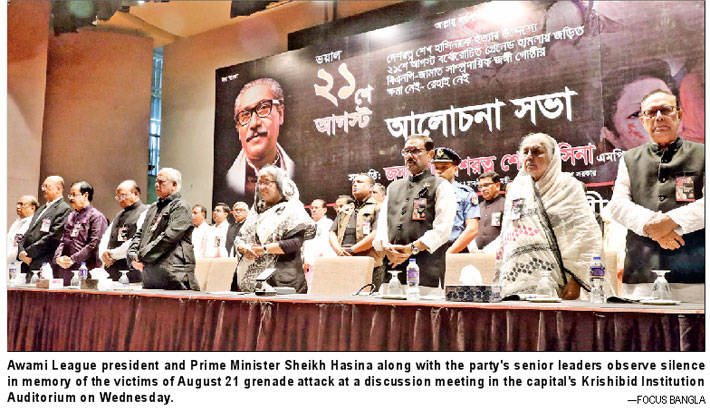 She said that the government usually preserves evidence after an incident while the then government destroyed the evidence.

“When I left the area, batons were charged. Vehicles of the city corporation were brought to destroy the evidence through water. Being learnt about the motive, I asked Nanak to go there. Our leaders and activists tried to preserve the evidence,” she recalled.

“The then BNP-Jamaat government did not collect the evidence rather they opened the case with a Joj Mia drama,” she said.

Referring to the incident, the premier said an unexploded grenade was found on the spot.

“An army official lost job as he wanted to preserve the grenade. They tried to destroy all evidence. The attack was carried out on behalf of the government,” she said.“Though it was a terrible incident, police remained silent…. The entire area looked like a sea of blood…Instead of rescuing the injured, police charged batons and lobbed teargas,” she said.

The ruling Awami League organised the programme, marking the 15th anniversary of the brutal attack on its anti-terrorism rally on Bangabandhu Avenue 15 years ago.

Sheikh Hasina narrowly escaped the brutal attack but suffered damage in her right ear while many others are haunted over the incident still after 15 years of the heartrending incident.

Recalling the gory incident on August 21, the premier said she does not afraid of the death.

“The Almighty Allah sends everyone in the earth to carry out some. I might have some work left. That’s why Allah keeps me alive…I do not afraid of the death and do not bow down to anyone,” she said.

Sheikh Hasina also blamed the BNP-Jamaat government for their remarks that she (Hasina) took the grenades to the spot through her vanity bag.

Countering the BNP’s allegation, the premier posed a question whether they went there to commit suicide.

The premier said journalists unearth many issues and they may bring the incident into the light.