Dabangg 3 to be released in four languages on Dec 20 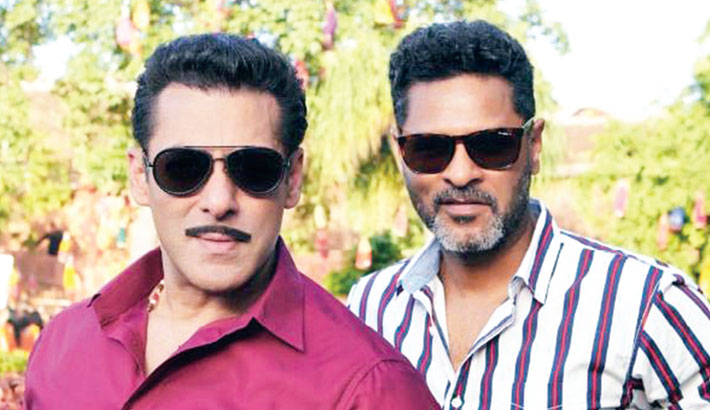 The wait for Salman Khan fans to see the superstar in Chulbul Pandey avatar will be over on December 20 this year. And not just that, the pan India audience will be able to enjoy Dabangg 3 in their own language, reports India Today.

Salman Khan took to Instagram to share a picture with Dabangg 3 director Prabhudeva, announcing that apart from Hindi, the film will be released in Kannada, Tamil and Telugu.

He wrote, "Chulbul Pandey coming to you on 20th Dec in Hindi, Kannada, Tamil and Telugu!"

Salman is currently shooting for Dabangg 3 in Jaipur, Rajasthan, with Sonakshi Sinha. The actor often takes to Instagram to share BTS pictures and videos from the sets of the film.

He recently shared a video, where he is seen with a camel. He shared the video saying, "#dabangg3 shoot #rajasthan with Sultan."

He earlier shared another video from Dabangg 3 sets. In the video, one can see that the shooting of the film has been temporarily stalled due to heavy rain. Sonakshi Sinha can also be seen in the background of the video.

Before shooting in Rajasthan, Salman shot for Dabangg 3 in Madhya Pradesh.

After wrapping up his shoot in Madhya Pradesh, Salman came back to Mumbai to promote his film Bharat. Meanwhile, the actor also lost weight to prepare to portray the younger Chulbul Pandey in the flashback sequences of Dabangg 3.

The decision of the makers of Dabangg 3 to release the film in four different languages is likely to prove beneficial. Salman Khan enjoys a huge fan following all over India and releasing the third film of Salman's much-loved franchise Dabangg will surely help mint some big bucks.

Apart from Dabangg 3, Salman will also be seen in Sanjay Leela Bhansali's Inshallah with Alia Bhatt.